I did not reject Wike, I picked who can deliver - Atiku 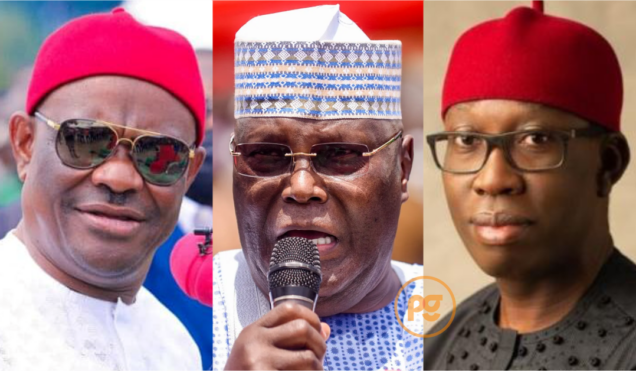 The presidential candidate of the Peoples Democratic Party, Atiku Abubakar, said he never rejected Nyesom Wike as his running mate but he only chose an individual that possesses the qualities of a “President-in-waiting.”

Atiku stated this in an interview with Arise TV on Friday morning while reacting to the controversies surrounding the choice of his running mate, Ifeanyi Okowa, and why he did not choose the Governor of Rivers State.

“In arriving at the decision, I held wide consultations with various stakeholders in our party including our governors, the national working committee, board of trustees, and other leaders to seek their input and their wisdom.

“In these consultations, I made clear that my running mate would have the potential to succeed me at a moment’s notice, that is, a president-in-waiting.

“In other words, the person must have the qualities to be President. The person must have an appreciation of the deep rot which our country has been put into by the rudderless All Progressives Congress government; understands the great suffering that most of our people are going through and the urgency of relieving them of that suffering; understands the critical importance of economic growth and development to provide our young people with jobs, hope, and a pathway to wealth.”

Meanwhile, the Benue State Governor, Samuel Ortom, on June 29, 2022, during an interview on Arise TV, said Wike, and others who backed the Rivers governor for the PDP vice-presidential ticket slot deserved a detailed explanation from the party’s presidential candidate on his choice of running mate.

This was as he also said he had resorted to fast and prayers to seek God’s direction after the emergence of Okowa as the running mate to Atiku ahead of Wike.

Ortom said it was surprising that Atiku could jettison the recommendation of 14 out of 17 members of the committee that recommended Wike as his running mate.

Ortom said, “I am waiting for him (Atiku) because there are more things he is expected to do. I expected him to reach out to Wike who came second and he denied him the popular view of PDP members. 14 out of 17 members say that Wike should be the VP but in his wisdom, he chose Governor Okowa. Governor Okowa is a nice man and my friend and I have no problem with him. But if we are in a democratic era, and 14 people out of 17 said that it should be Wike, and he (Atiku) in his wisdom gave it to Okowa, I expect more explanation, I expect him to talk to Wike first, I expect him to even reach out to some of us so that together we can work as a party.

“But the bottom line for me is that I have gone into hibernation and I am praying and at the end, whatever God directs me, I can assure you that I will do it.”

Reacting to the comments made by Ortom, Atiku said;

“The committee that presented the three nominees was chaired by the Governor of Benue State, Samuel Ortom. They recommended three people, so I picked one. People should be fair to me and state the facts.”

On the possibility of reconciliation with Wike, Atiku confirmed that talks were ongoing with the Rivers governor.

He said; “We are reaching out to Wike and we are talking with him and I believe very soon we will find a reconciliation. In fact, very soon, because we are talking to him.

“We are talking to his governor colleagues. I am very optimistic we are going to resolve our internal crisis and move on.”

He added, “I have contested this presidency a couple of times and I don’t try to blame anybody, I accept the outcome or go to court,” Atiku said.

Atiku also noted that he was driven by the passion to serve the country.

“With what I have been able to accomplish at my age, I don’t desire any other thing other than the passion to serve my country.

Speaking on zoning, Atiku said the PDP had never agreed to zone presidency to the South, noting that there was no concession like that.

“We never zoned to any part of the country,” he said.