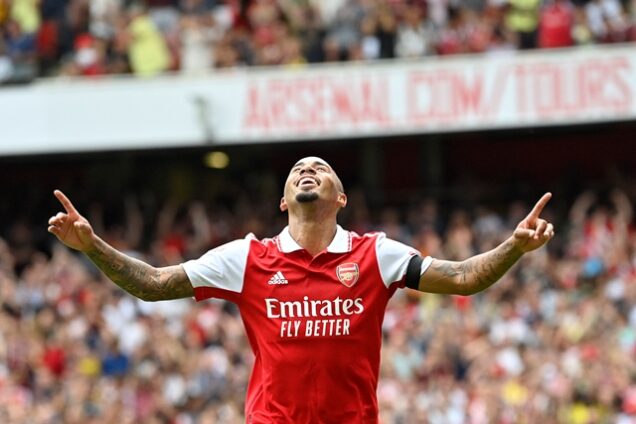 Gabriel Jesus grabs a hat-trick as Arsenal hit six goals past Sevilla on Saturday as they step up preparation for premier league next week.

The gunners claimed the Emirates Cup in style with a dominant performance against the Spanish side.

A capacity crowd were treated to four goals in the opening 20 minutes, courtesy of braces from Bukayo Saka and Jesus, with the Brazilian striker completing his treble on 77 minutes before Eddie Nketiah got in on the act in the final minute.

The performance, clinical finishing and clean sheet ensured it was a wonderful afternoon’s work for Mikel Arteta’s men, who look well-prepared for the Premier League starting in six days’ time.

He added a third just two minutes later, and Saka matched him before the 20-minute mark, pressing high and finishing well.

Xhaka went close to a fifth before Jesus grabbed his third from close range. Nketiah completed the scoring a minute from time.

An elated Mikel Arteta after the match said “They are going to hopefully love every player, for the commitment and everything that they try to give on that pitch. I think that connection is being built because they know that the players transmit what they are willing to do.

“We want to give them [the supporters] the right enjoyment, and the right performances to make them happy, and we are getting everything back from them as well. So I think there is good chemistry there.”

Arsenal kick off their premier league campaign next Friday in a difficult trip to Crystal Palace.

Palace had demolished Arsenal 3-0 last season, a result that made the gunners crash out of top four