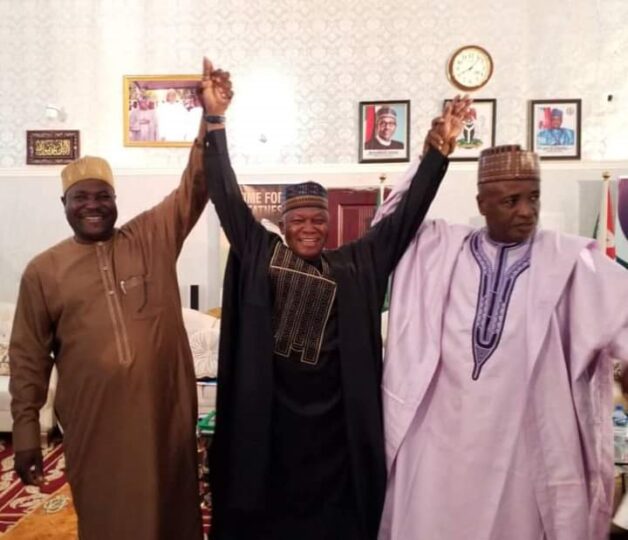 Sokoto Commissioner for Careers and Security Matters retired Colonel Garba Moyi Isa (middle) when he was received into the All Progressives Congress, APC by Senator Wamakko.

Sokoto Commissioner for Careers and Security Matters, retired Colonel Garba Moyi Isa has dumped the Aminu Tambuwal administration and the Peoples Democratic party, PDP for the All Progressives Congress, APC.

Moyi also announced his resignation as member of Sokoto state Executive council and commissioner in charge of the Ministry of careers and security matters in the state.

Isa defected to the APC barely less than twenty four hours after Salihu Bashar Kalanjine, the chairman of Tangaza Local Government Council and some counncillors also joined the party from APC.

APC leader in Sokoto, Senator Aliyu Magatakarda Wamakko, alongside other party chieftains received the the commissioner at his Gawon Nama Sokoto residence.

While addressing Isa Wamakko charged him to work hard in the ensuring the victory of APC in Sokoto East Senatorial District and the state at large during the forthcoming 2023 General elections.

Isa said he decided to dump PDP because Tambuwal’s administration is devoid of trust, not focused and lacks the ability to govern effectively.

He further explained that he wanted to be part of ongoing giant efforts of Senator Wamakko to reposition the APC in Sokoto State.