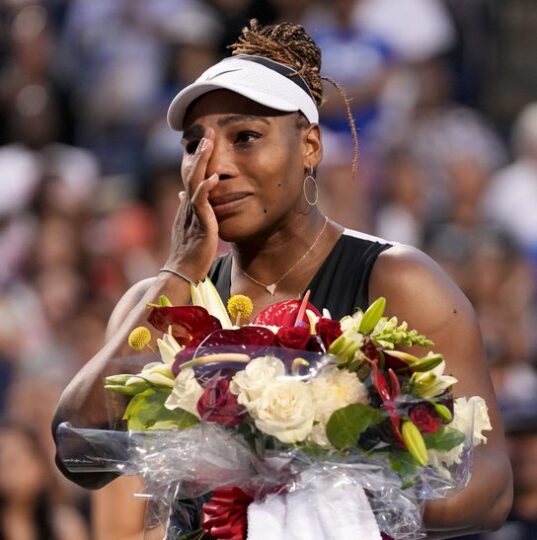 The first stop on Serena Williams’ farewell tour came to a quick end after 77 minutes, as she fell 6-2 6-4 to Belinda Bencic in second-round action at the Canadian Open on Wednesday.

Her defeat came a day after announcing her forthcoming retirement from tennis in a Vogue interview.

Williams arrived on the court to a standing ovation and had the full support of the capacity crowd throughout the match but was unable to conjure up the old magic that helped her lift three titles in Canada.

“It’s been a pretty interesting 24 hours … I’m terrible at goodbyes. But, goodbye Toronto,” an emotional Williams told the crowd.

“I always had amazing times here both on and off the court. I’ll be coming back just as a visitor to the city but otherwise it’s been remarkable.”

After the match, Williams was presented with team jerseys of Toronto’s NBA and NHL teams for her and her daughter, who was in attendance, as well as a bouquet of flowers that she carried off the court while wiping back tears.

Prior to the match, a tribute video was played featuring comments from tennis pioneer Billie Jean King, current players like Coco Gauff and Emma Raducanu as well as ice hockey great Wayne Gretzky and highlights of Williams’ Canadian triumphs.

The highly-anticipated match was played a day after 23-time Grand Slam champion Williams revealed in a Vogue article that she was “evolving away from tennis” and planned to retire from the sport she has dominated for over two decades.

Olympic champion Bencic saved the lone break point she faced in the opening set and broke Williams twice to jump ahead 5-2 but the Swiss 12th seed then needed five set points to clinch the opening frame.

In the second set, Bencic got the one break she needed to go ahead 4-3 when Williams struck a double-fault and the Swiss never looked back as she sealed the match on her serve when Williams sent a return long.

“It was a lot of emotions obviously,” Williams said about how it felt to take the court. “I love playing here, I’ve always loved playing here. I wish I could’ve played better but Belinda played so well today.”

Up next for Bencic will be Spanish eighth seed Garbine Muguruza, who was a 6-4 6-4 winner over Estonia’s Kaia Kanepi.