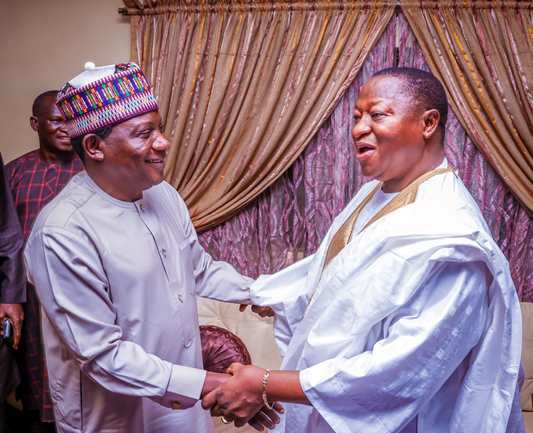 Lalong and Dariye during the visit

Former Governor of Plateau State, Joshua Dariye has broken his silence since his release from prison on 8 August, 2022.

Dariye and former Governor of Taraba State, Jolly Nyame were granted pardon by the President Muhammadu Buhari’s government on 14th of April, 2022.

Both former governors were serving jail term for corruption allegations until they were granted pardon by President Buhari, a development that received a lot of negative reactions.

He debunked rumours that he was running for senate and advised politicians in Plateau to unite and support the governor in promoting the interest of the state and its people.

He described governance as an opportunity for those in charge to do their best and leave posterity to judge their efforts, saying no one could finish the business of government in a day.

Speaking, Lalong, who visited Dariye with his wife’s, Mrs Regina Lalong at his residence in Abuja.

The visit was disclosed by his Spokesperson, Dr Makut Macham in a press release on Friday in Jos.

He thanked President Muhammadu Buhari for his magnanimity in granting pardon to Dariye and Nyame on April 14, saying massive prayers and appeal was made to facilitate it.

He said the visit was to encourage him as his release was another opportunity for him to reflect on his experience.

Lalong urged him to continue to contribute to the advancement of Plateau through his knowledge, while praying to God to grant him good health in all his duties.

The delegation which included National Assembly members as well as members of the State Executive Council, also visited Rev. Jolly Nyame at his residence in Abuja.