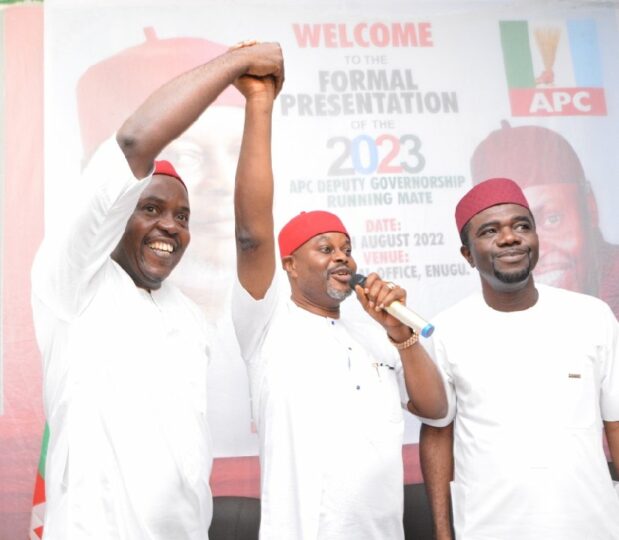 Governorship candidate of the APC in Enugu for 2023 election, Chief Uche Nnaji, unveils Chief George Ogara as his running mate.

Governorship candidate of the All Progressives Congress (APC) in Enugu State in 2023, Chief Uche Nnaji, on Sunday unveiled Chief George Ogara as his running mate.

Making the declaration at the party’s zonal secretariat in Enugu, Nnaji said the process of choosing a running mate was Herculean because of the quality and qualification of the person required.

He praised God that he finally found a professional and an astute politician as running mate.

“I believe he will add value and impetus to our campaign efforts and in giving Enugu State people good governance when we emerge victorious in 2023,’’ he said.

Nnaji added that he was currently visiting the 260 wards in the state on a “thank-you’’ tour and the exercise had given him the opportunity to determine the level of infrastructural decay in the state.

He stressed that infrastructure would be put on the front burner after he had emerged as governor in 2023.

In his remarks, the state’s chairman of the party, Chief Ugochukwu Agballah, thanked Nnaji for the choice of Ogara whom he described as a lawyer par excellence and philanthropist of note.

“Today we are re-invigorated for the final onslaught to take over Enugu State in 2023.

“We call on traditional and religious leaders and every lover of Enugu State to rise against the ignoble machinations of opportunistic cabals that have been wrecking Enugu State,’’ he said.

In his acceptance speech, Chief Ogara appreciated the governorship candidate and the party for finding him worthy to serve as deputy governor.

“I will play my role and help to pay attention to the minute details that will help our party to achieve victory.

“I will also be loyal to the party and to my principal. We shall do everything necessary to get to the seat of power,’’ he stressed. (NAN) (www.nannews.ng)