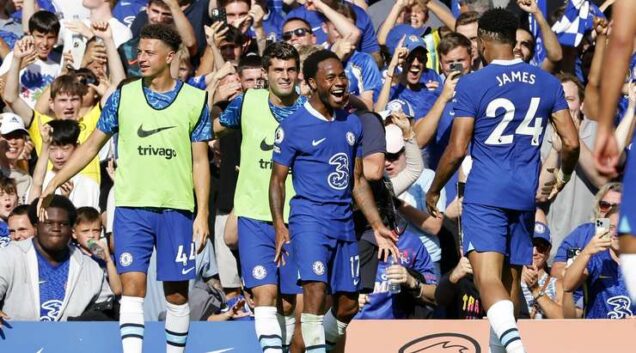 Chelsea were dealt a blow on 28 minutes as Conor Gallagher was shown a second yellow card and sent off.

But it was the homers who opened scoring on 47 minutes through new signing, Sterling.

Marc Cucurella passed the ball to Sterling and he fired in a shot from the edge of the box which was deflected in for a great goal and his first goal for Chelsea.

He made it 2-0 for the homers on 63 minutes. Reece James played a terrific cross over to Sterling, who found some space inside the box and put the ball into the back of the net.

Harvey Barnes was put through by Jamie Vardy and he showed brilliant composure inside the box to fire into the left side of the net.

Later in the game, Jamie Vardy pounced onto a cross and fired in a shot on goal from close range, but Edouard Mendy was alert and made a decent save.

Few minutes to the end of the game, Ayoze Perez picked up a pass inside the box and unleashed a shot goalwards that crashed against the bar. It could have been a brilliant goal.