Gov. Abiodun thanks Iberekodo residents for saving his life 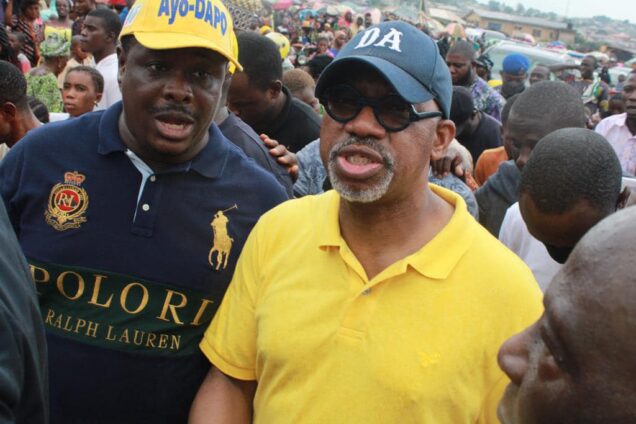 Gov. Abiodun thanks Iberekodo residents for saving his life in 2018

Governor Dapo Abiodun has appreciated the people of Saje-Elega, Iberekodo, for the vital role they played during his ordeal in the community in 2018.

He spoke during an inspection of Saje-Elega road on Monday.

The governor was full of praises to God and the people of the communities.

He said and his entourage were attacked at the Iberekodo market by some sponsored hoodlums but were able to survive the attack through God’s intervention and the help of the people.

“When we came here in 2018 to campaign, some hoodlums came and attacked us with guns and other dangerous weapons. We were able to survive through the intervention of God and your support.

“So I am here to appreciate you and to thank you for all you have given us so far”.

Abiodun announced that about 1000 youths drawn from Saje-Elega, Mokola, Ajitaadun, and Iberekodo communities in the Abeokuta North Local Government Area, will benefit from the Youths Empowerment Programme of the State government.

He explained that his current administration is determined to assist the youths to be self-dependent.

The governor said that the government has put in place empowerment programs that would be beneficial to the youths across the State.

” I will ask the local government chairman and the liaison officers to compile the list of youths in this local government and 1,000 of them will be empowered and we will also give them some stipends. This is because when the youth are able to take care of their needs, there will be fewer problems in our communities.

“I know that our youths are hardworking and since not all of them can be employed or given contracts, we will empower them and make them fill a sense of belonging”, the governor noted.

The governor also appreciated the people of the community for their steadfastness and commitment to the development of the state.

He explained that he was at the area to inspect the road and fashion out a lasting solution to make it accessible for the people of the area.

Assuring the people of the area of more dividends of democracy, the State helmsman urged them to continue to support the government in its quest to repositioning the State and the socio-economic wellbeing of the people.