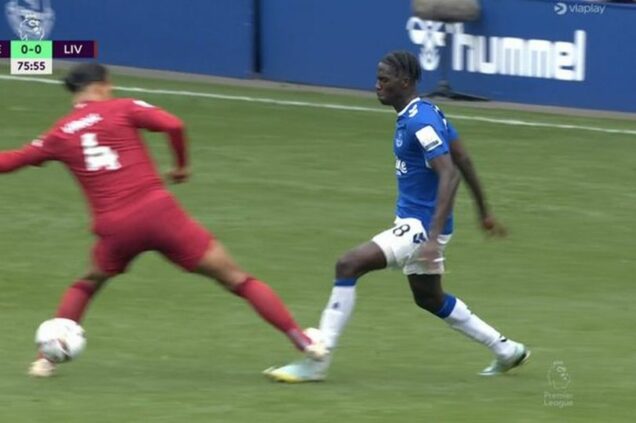 The Liverpool defender got caught up in the frantic pace of a chaotic second-half, lunging in on the advancing Onana but failing to make contact with the ball. The Dutchman appeared to go over the ball and scrape down the shins of his Everton opponent, leading to calls from the home side for red.

But referee Anthony Taylor – who had been allowing strong challenges to happen consistently throughout the derby – brandished a yellow card. And upon reviewing the challenge, BT Sport pundit and ex-ref Walton explained why.

“The threshold on that one if there’s any force used against the foot it’s a yellow card,” Walton said live on BT Sport . “If the force is used to the shin it could be elevated to a red card. But in this instance Virgil van Dijk’s foot actually slipped down the shin and ended up on the foot which is why it’s a yellow card.”

Taylor took a more lenient approach to a feisty affair throughout, allowing the game to flow as both sides gave everything.

Everton fans were left fuming, however, when they did not see a red card being held aloft for Van Dijk, who may consider himself lucky to have stayed on the pitch.