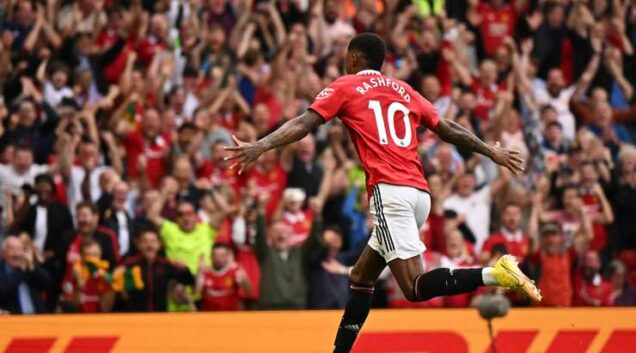 Rashford got a brace as Manchester United thrash Arsenal.

Manchester United have ended Arsenal’s unbeaten run in the premier league with a 3-1 thrashing at Old Trafford on Saturday, with Marcus Rashford grabbing a brace.

Arsenal have recorded five games winning streak coming into the game at the Old Trafford but a dominant performance from United led to a thrashing.

The Gunners opened the scoring on 12 minutes as Bukayo Saka teed up Gabriel Martinelli inside the box, and he kept his cool to find the bottom right corner, but the Referee ruled out the goal after VAR’s check.
United’s new signing Antony opened scoring for the Red Devils on 35 minutes.
Marcus Rashford played the ball to Antony, who found himself unmarked inside the box and slotted a first-time shot past Aaron Ramsdale into the bottom left corner.
Arsenal equalised on 60 minutes through Bukayo Saka.
An unlucky rebound off one of the defenders fell at the feet of Bukayo Saka and he did not miss from such an obvious opportunity.
Six minutes later, United took the lead again after Bruno Fernandes played the ball to Marcus Rashford, whose deflected shot from inside the box went past the helpless Aaron Ramsdale.
Rashford got his brace to make it 3-1 for the homers.
Christian Eriksen put the ball on a plate for Rashford, who scored with a simple close-range finish.
Tags:   ARSENAL   Manchester United   Marcus Rashford