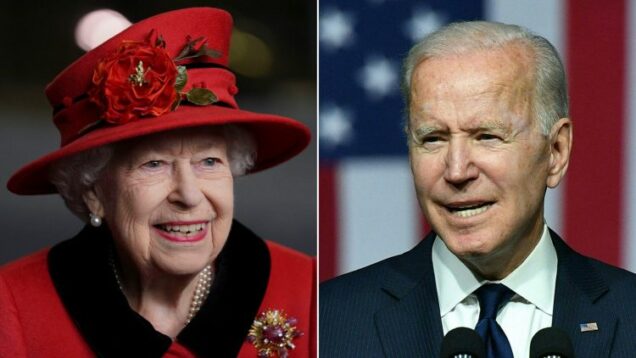 US President, Joe Biden has led international tributes in mourning the death of Queen Elizabeth II.

The British’s longest-reigning monarch died on Thursday at the age of 96 at her Balmoral Castle in Scotland.

Biden in a statement said the Queen was a steadying presence and a source of comfort and pride for generations.

He said “Her Majesty Queen Elizabeth II was more than a monarch. She defined an era. Today, the thoughts and prayers of people all across the United States are with the people of the United Kingdom and the Commonwealth in their grief.

“We send our deepest condolences to the Royal Family, who are not only mourning their Queen, but their dear mother, grandmother, and great-grandmother.

“Her legacy will loom large in the pages of British history, and in the story of our world.”

He added that Queen Elizabeth II was a stateswoman of unmatched dignity and constancy who deepened the bedrock Alliance between the United Kingdom and the United States.

“She helped make our relationship special. We were honored that she extended her hospitality to us in June 2021 during our first overseas trip as President and First Lady, where she charmed us with her wit, moved us with her kindness, and generously shared with us her wisdom.

“She helped Americans commemorate both the anniversary of the founding of Jamestown and the bicentennial of our independence. And she stood in solidarity with the United States during our darkest days after 9/11, when she poignantly reminded us that ‘Grief is the price we pay for love,” Biden added.

“I remember her as a friend of France, a kind-hearted queen who has left a lasting impression on her country and her century.”

German Chancellor, Olaf Scholz described the Queen as a “role model and inspiration for millions”.

He praised her role in repairing relations between the UK and Germany after “the horrors of World War II”.

Also, Justin Trudeau, Canadian Prime Minister described the late monarch as one of his favourite people in the world.

He wrote: “She was a constant presence in our lives – and her service to Canadians will forever remain an important part of our country’s history. I will miss her so.”