Wike to PDP: A day of reckoning is coming 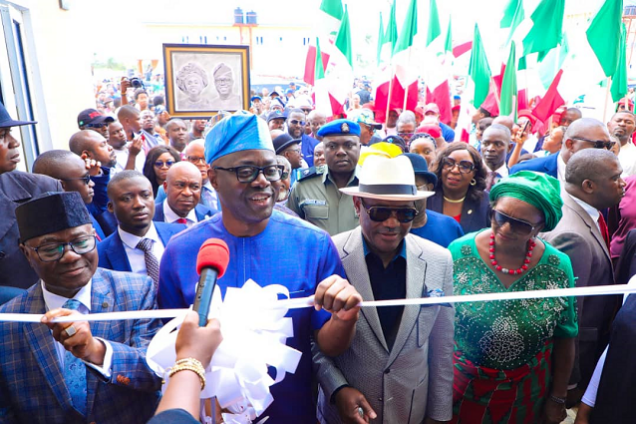 Rivers State governor, Nyesom Ezenwo Wike has said the time of reckoning is coming for those who continue to insist that they can take everything to themselves in the Peoples Democratic Party (PDP

Rivers State governor, Nyesom Ezenwo Wike has said the time of reckoning is coming for those who continue to insist that they can take everything to themselves in the Peoples Democratic Party (PDP).

Wike also maintained that nobody can silence him from speaking against such injustice and the demand for the right thing to be done.

Governor Wike spoke at the inauguration of Emohua campus of Rivers State University, and the flag-off of staff quarters, performed by Seyi Makinde, governor of Oyo State on Wednesday.

The Rivers State governor said such persons will definitely account for every wrong thing that they have done when the day of reckoning comes.

“That is why I am telling the people there, look, it cannot work. You can’t take everything. If you take everything, it will purge you. So, better do the right thing now.

“Don’t sit there and think that you can muscle me and you can do everything, you can manipulate anything. You can think you have the number to make sure you take everything, but the time is coming when you will account for it.”

Governor Wike insisted that the delivery of quality projects by him and his colleague governors will serve the PDP well in their respective States.

According to him, it will be erroneous for PDP States that have failed to provide good governance to solicit for votes from the electorate.

“If any PDP State is not doing well, don’t think you will be voted for because APC is not doing well. If PDP state, for example, if in Rivers State we didn’t do well, then you’ll say because APC did not do well at the national, then the people will vote for us. They’ll tell you PDP you didn’t do well in Rivers State. People don’t understand that. And that is why the party should respect us and know that we are the ones campaigning for the party. Because we have what to use to campaign.”

The Governor explained that his administration has avoided the pitfall most government suffer because they do not set aside requisite budget for projects they conceptualise, and they end up littering the places with uncompleted projects.

He said when projects are conceptualised, his administration provides adequate budget to complete them, which is why no project awarded by him will be abandoned.

Governor Wike pointed out that the establishment of multi-campus for RSU is strategic in increasing access to education, providing more space for effective teaching and learning to take place and, grow the economy of rural communities.

“I told the pro-chancellor and Chairman of Governing council they we have to establish satellite campuses so that the main campus will leverage on other facilities that have been occupied by some of these faculties.

“Secondly, it will have to bring development to these areas. I do not believe in establishing so many universities for establishment sake. Yes, there is need for access to education, having created this campus, you are also creating access.”

The governor directed the Chairman of Emohua Local Government Area, Dr. Chidi Lloyd to within the next three months, build a Police Station that will provide security to the new campus.

Governor Wike also assured that the promise of reconstructing the Government Secondary School Emohua will be fulfilled and directed the Commissioner for Education to do site inspection and report back to his office.

Performing the inauguration of the campus and flag-off of the staff quarters, Oyo State governor, Seyi Makinde noted such multi-campus of a university promote quality education, expand the scope of learning, and open up access to tertiary education.

Makinde noted the endeavour by governor Wike as evidence of his vision and commitment to the good of the people of Rivers State.

“If children are doing all of these, I think what Nigeria needs are children. So my brother (Wike) you can be rest assured that Nigeria appreciates you.

On his part, Rivers State Commissioner for Education, Prof. Chinedu Mmom said governor Wike has continued to give premium attention to the need for improvement in the quality of education by approving the recruitment of teaching staff for the various State owned tertiary institutions in the state.

Also speaking, Rivers State Commissioner for Special Projects, Deinma Iyalla said the staff quarters will have a total of 12 flats; 6 units of 3 bedroom and 6 units of 2 bedroom of two blocks of one storey building.

On his part, the vice chancellor of Rivers State University, Prof Nlerum Okogbule described Governor Wike as a special gift to the institution and the State because his support has propelled RSU to an enviable height.

In his address, Emohua Local Government chairman, Dr. Chidi Lloyd noted that the campus has put Emohua on the global map and will open up future development opportunities for the people

Sent from Yahoo Mail on Android