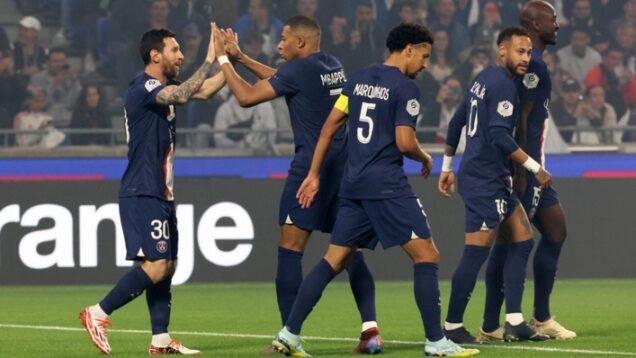 Lionel Messi and Kylian Mbappe celebrate during the win over Lyon

Lionel Messi fired Paris Saint-Germain back to the Ligue 1 summit as his early goal secured a 1-0 win over Lyon.

Despite PSG dominating possession for long stretches at Groupama Stadium, Christophe Galtier’s side had to fend off a determined Lyon in the second half to take maximum points.

PSG’s Sunday evening success means they leapfrog Marseille at the top of the table after extending their winning streak to six matches across all competitions.

Defeat for Lyon ended their run of eight straight league victories on home turf – which had been the longest ongoing stretch in the big five European leagues.

PSG took the lead after just five minutes, as Messi swept a first-time shot past Anthony Lopes following a neat one-two with Neymar.

Messi was then denied from a tight angle as the visitors dominated the opening 20 minutes, while Lopes blocked Kylian Mbappe’s 20-yard effort.

PSG almost doubled their lead within a minute of the second half starting, as Castello Lukeba headed Messi’s goal-bound shot off the line.

It then took magnificent reflexes from Lopes to prevent Neymar and Messi from increasing the lead, while Thiago Mendes’ brilliant last-ditch intervention also thwarted Neymar.

The visitors survived a scare when Marquinhos blocked Moussa Dembele’s goalbound header before Messi was denied a late second as Lopes saved brilliantly from his free-kick. Sergio Ramos was denied by the offside flag when he tucked in the loose ball.

What does it mean? PSG back on top after stretching unbeaten streak

Returning to top spot, PSG extended their unbeaten streak to 17 league matches – a run only bettered at present by Manchester City (18) across the big five European leagues.

Meanwhile, Lyon have lost three straight games in the French top flight for the first time since February 2018.

After applying the finishing touch to a wonderful one-two with Neymar, Messi proved to be the match-winner as he found the net for a second successive game.

The former Barcelona captain’s strike came in a game where he had game-high tallies of seven shots on goal, and five on target, while no player provided more crosses throughout the contest (four – level with Neymar).

Neymar notched up another assist on what was his 100th appearance in Ligue 1.

It was the Brazil international’s 121st direct goal involvement (77 goals, 44 assists) – more than any other player across his first century of games in the French top flight since Opta began analysing the competition in 2006-07.

PSG will look to remain top of Ligue 1 after the international break when they welcome Nice on October 1, while Lyon aim to respond away at Lens the following day.