Peter Obi at LCCI: 'I am not a Superman' 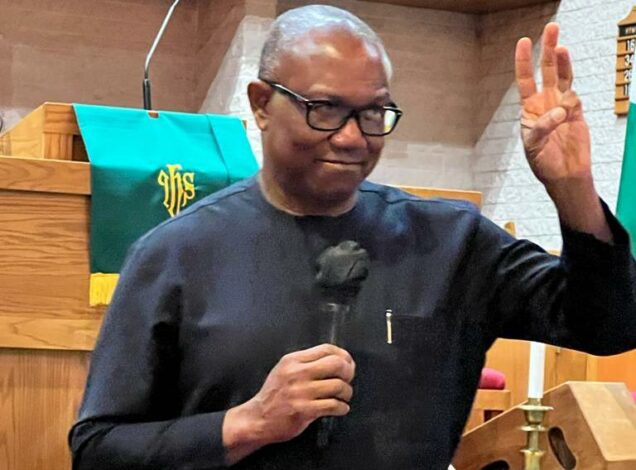 Labour Party’s Presidential candidate Peter Obi was at the Lagos Chamber of Commerce and Industry (LCCI) Private Sector Economic Forum on the 2023 Presidential Election on Monday in Lagos.

He promised to address the numerous challenges of the nation, but admitted that he is not a Superman in tackling the problems of the nation.

“I am not saying that I am going to be a superman but I am going to bring the political will to follow the rule of law, to deal with issues of oil theft, and address leakages in government revenue to address the funding of the Academic Staff Union of Universities (ASUU).

“I am offering the ability to do the right thing and ensure that it is done going forward from 2023.

“Nigeria’s problems though daunting and difficult are solvable and my appeal is that 2023, election would not be based on ethnicity but on competence and accountability,” he said.

Obi said if elected in 2023, his government would overhaul the country’s security architecture and revive trust between government and the people to set a new economic order.

According to him, any government that takes over in 2023 would be confronted by daunting challenges; both domestic and external which have degenerated over the years due to leadership failure.

The LP presidential flagbearer stressed that the country was not bereft of good ideas and plans, but that institutional weakness and lack of political will to implement them had limited it’s economic potential.

Obi said aside overhauling the entire security architecture, his government would ensure multilevel policing at federal, state and community levels, and equip them properly with modern gadgets to free the economy from the woes of insecurity.

He stated that upon becoming president, his government would streamline governance to ensure that it was responsive, transparent and effective; ensure institutional reforms and engender inclusive, participation of all groups.

Obi said the country must hold his government accountable in terms of visible, measurable changes on security, manufacturing for exports, and the use and adherence to the rule of law to consolidate Nigeria’s democracy.

“Good governance must be aimed at providing good service and receiving constructive criticism and moving forward with the goal of bringing back the trust of people to governance.

“Under my watch, all groups such as the youth, women, disabled, vulnerable, private sector, must be represented in my government’s decision making process seeing that I am committed to providing a demand driven leadership.

“As a trader, I am one of you and sincerely recognise your challenges and pain, and would provide my own solutions to the questions that have been raised, particularly, security which is impacting on all other economic problems.

“We have identified and prioritised seven critical areas in line with some Sustainable Development Goals (SDG) to ensure purposeful leadership as we secure and unite Nigeria with effective legal and institutional reforms,” he said.

Obi stressed that to address the country’s revenue and other economic crisis, his administration would invest in manufacturing to move the country from consumption to production and exportation.

He said his government would also create an asset register and ensure that the country’s assets became more productive under genuine private sector watch.

He stated that apart from tackling insecurity, the issue of power generation must be addressed head-on by liberalising transmission and supporting the existing power generating companies.

These, Obi said, would ensure that the power sector was properly aligned with clear policies and the regulatory environment.

LCCI President, Dr Michael Olawale-Cole, said the overshadowing effect of politics over economics made the chamber set up the event as its contribution to a new economic order that could take the Nigerian economy from the doldrums.

He noted that patriotic Nigerians would like to know the plans and intentions of a future president, and this would most likely enhance the choices people make at the polls.

“Nigerians have another opportunity to decide who leads them in the next four years from 2023-2027.

“The Nigerian economy has been inundated with a myriad of problems among which are oil theft, an unsustainable subsidy regime, insecurity, and a foreign exchange crisis.

“However, in spite of all these challenges, the prospects and future remain bright for the Nigerian economy with the country as the largest economy on the continent with an output in the region of almost half a trillion dollars in nominal times,” he said.

The LCCI President tasked the Federal Government to pay special attention to the education sector, by providing long lasting solutions to the issue of industrial disputes in the country.