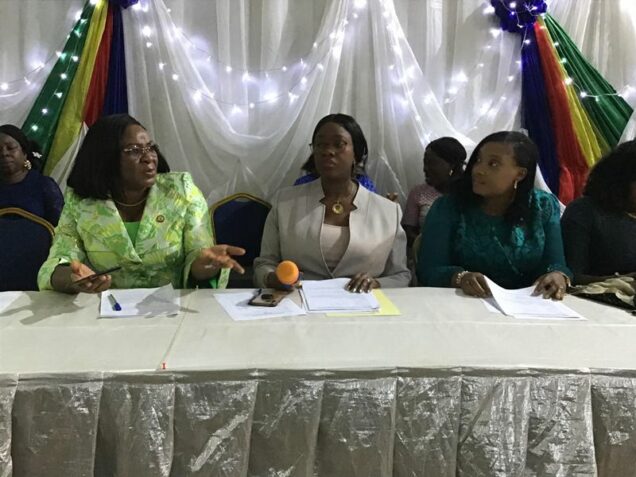 WAPA Commissioner, Cecilia Dada (middle) and other government officials at the event.

Lagos State Government on Thursday disclosed that it graduated 16,900 youths from its various skills acquisition centres across the state last month.

The event has the theme: “Know your Government,” aimed at acquainting the NGOs on government activities to empower women.

The commissioner stated that women empowerment, in all ramifications had been, and remained in the front burner of the Governor Babajide Sanwo-Olu’s administration.

Dada disclosed that in the last three years, Sanwo-Olu had embarked on different initiatives to ensure financial independence of women.

“From Year 2019 till date through our Short-term Skills Acquisition programme, we had recorded a number of 12,500 beneficiaries; participants were given start-up packs to proceed with their businesses. Through the Micro-enterprise  support scheme initiative (MESI) Items, such as Pepper grinding Machines, Sewing Machines,  Popcorn making Machines, Barbing set with generators and sterilizers, Cake mixers, Industrial burners were given to 8, 885 beneficiaries

“In addition, on 17th of August 2022, a total number of 16,900 young Women and Men graduated from our 19 skills acquisition centers which are situated across 5 divisions of the State. From time to time, the Ministry, through the Domestic Violence unit organizes workshops for various stakeholders to sensitize them on ways of curbing Gender – Based violence,” she said.

However, Dada said focused women NGOs played critical roles in evolving support and fight against negative actions on women, promotion of women’s participation in the socio-economic growth of the society, as well as one targeted to make them achieve economic self-reliance, equal access to the labour market and social security systems.

She explained that the meeting was meant to bring NGOs together, affording them the opportunity to rub minds on the issues pertaining to their progress and development of Non-Governmental Organizations domicile in Lagos State.

According to her, WAPA is saddled with the responsibility of reducing poverty to its barest minimum through the various empowerment programmes for women,  as well as the protection of their rights  across all strata.

“This year’s interactive meeting tagged,’ Know your Government’ is thought provoking as it  provides  the public  opportunities to be well acquainted with activities  of the Lagos State Government,” she added.

In her presentation, Commander, Special Female Squad of the Nigerian Security and Civil Defence Corps (NSCDC), Lagos State, Deputy Superintendent Ada Agada, said women should not think it is only those in uniform that should provide security.

She said they could partner with security operatives to secure their domains, saying that women could also play a role in fighting crime in the society.

Agada stated that her unit was set up with specially trained women in combat to help fight crime, rape, defilement and other atrocities meted out to women.

“Women are naturally vulnerable, but we can do better, that is why government sets up WAPA. Our unit is to help women in the society so that we can feel safe, the unit is made up of gallant women. NGOs are free to call the women in our team for support when they are holding programmes. They will help to fight and combat crime, call on us as NGOs, we will back you up,” she added.

He said they could leverage on the scheme to get adequate healthcare at minimal cost for their members on yearly basis.

Braimoh said NGOs with sizeable number could get the help of government when they keyed into the Ilera Eko Healthcare system, adding that currently, 700,000 Lagosians are currently benefitting from the scheme.