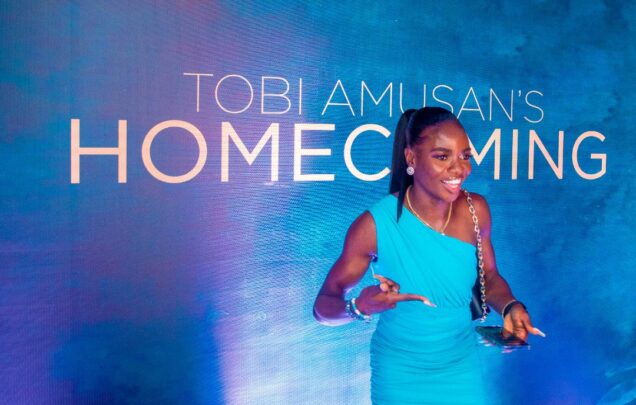 By Taiwo Okanlawon and Ayodele Efunla

The homecoming dinner which was held at KOI Restaurant, VI, Lagos on Wednesday had in attendance guests ranging from top CEO, banks executives, celebrities in entertainment industry, political figures, and socialites to mention a few.

Some of the dignitaries in attendance include Nigerian hip-hop legend, Naeto C, Obi Asika, Adesola Adesugba, Bukola Olopadenilayo, FK Abudu and a host of others.

There were also major appearances from Flutterwave which declared that it had signed a multi year partnership deal with the World Record Holder, Tobi Amusan. In their words:

“It’s very difficult to find athletes who embody our core values the way Tobi does.”

The World Athletics body had on Tuesday, ratified Tobi Amusan’s World Record of 12.12s (0.9) set at the World Championships after winning the Gold Medal in the Women’s World 100m hurdles at the 2022 Commonwealth games.

Speaking to journalists at the occasion, Tobi said the ratification of her record was a breathe of fresh air as she is happy to reach such milestone.

“It’s a breathe of fresh air for me and I’m getting a hang of everything happening to me right now. My 200 million soldiers supported me through the World Championships, Commonwealth games and Diamond League, I trust them.

“As an athlete, I eat everything that I can, especially things that can give me energy”. Amusan said.

Speaking on the circumstance leading to the historical moment in Oregon, Amusan said she was injury prone, hence the need to take the loan to enable her to stay in shape for the competition.

“Yes, definitely. I’ve got injuries a couple of times,” she said.

“There was so much I needed to do when it comes to my health as a professional athlete, and staying on top of my game required a lot of funding.”

Nigeria’s President, Muhammadu Buhari recently handed the Officer of the Niger (OON) to Tobi Amusan following her exploits in the past three months.

“It’s a great feeling to be recognised by the president,” the world record holder said.

“In as much as we did the work, it was an honour that they realised that we did the nation proud and it was a great feeling getting that title.”

Tobi Amusan is a World Champion, a World record holder in (12.12s), a Diamond League Champion, an African Champion, a Commonwealth Champion, a National Champion, with 17 wins in 25 races. A staggering feat on all accounts!