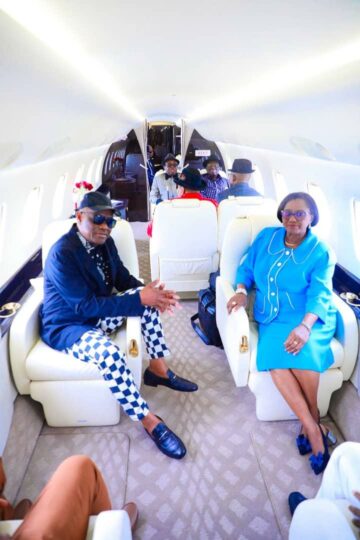 The All Progressives Congress, APC in Rivers has lashed at Governor Nyesom Wike and his partyy, the Peoples Democratic Party, PDP over their recent fanfare at the Port Harcourt International Airport to celebrate the arrival of the State-owned Embraer A600 aircraft abandoned in Munich, Germany.

In a statement by its spokesperson Darlington Nwauju on Thursday, the APC described the fanfare and dramatisation of the return of the aircraft to Rivers State as proof the level of joblessness of many people in the State.

According to APC, an additional aircraft for Rivers in the face of poverty ravaging the citizens of the state in the midst of plenty is absolutely unnecessary.

The party argued that because of the global economic meltdown, governments all over the world have their sleeves rolled up for work and not jamborees or investments with zero Return on Investment (RoI), that can only shoot up the state debt burdens and deliver an unhealthy balance sheet to the incoming government in Rivers State.

On what to do with the Aircraft, APC said: “We recommend that the state government should immediately dispose the said legacy jet A600 and invest its accruals into refurbishing all abandoned primary and secondary schools, resuscitation of the moribund primary healthcare system, pay off all outstanding salaries owed teachers of demonstration secondary schools, wrongfully dismissed lecturers of Ken Saro-Wiwa Polytechnic, 5 years salaries of Rivers State Sustainable Development Agency, RSSDA staff, pensions and gratuities, students bursaries and many more unresolved obligations of the state government”.

APC also mocked Wike for claiming that the Aircraft got missing, because his administration was not given a handover note by its predecessor.

“We salute both the promoters of the “miracle” and the court jesters working on this monumental achievement, which no state government in Nigeria can evet attain! We suspect that this miracle was made possible by the combined efforts of Germany-based metaphysicians who gained access to the handover notes of the Rivers State Ministry of Transport and discovered the Ministry’s assets/liabilities as at 2015 which included a Legacy jet A600 aircraft”.

It also queried the state on how it will defray the obligations like the landing cost of the aircraft it put at about $20,000.00 USD, daily parking fee of up to $2,000 to park on the tarmac or will the state award a contract to Julius Berger to build a hanger?

“How will the state source for up to $4,100 navigational charges per flight whenever it has to be used? Minimum of N1.5m monthly salary for a Pilot and N500,000.00 for at least one cabin crew member? Engagement of a ground crew (maintenance engineers, cleaners, security)?;Maintenance, observation and repairs (MoR) to carryout C-check in Europe, the cheapest being in Turkey because of its proximity to Africa but this will cost the state hundreds of thousands of dollars; the Payment of insurance on the aircraft which is in dollars,3million Euros spent by the State Government as the cost of refurbishment and the NCAA air-worthiness check.

On his part, Nigeria’s former ambassador to the Netherlands, Oji Ngofa says the Rivers State government should be ashamed of making a drama out of a refurbished aircraft that was returned to the state.

Ngofa expressed shock that when other state governors are busy creating wealth and jobs, Rivers people allowed themselves be deceived by celebrating an aircraft that would not add value to their lives.

Another APC chieftain,Prof. Lawrence Chukwu dismissed the fanfare displayed at the Port Harcourt International Airport over the return of Aircraft. He called on the state government to sell off it off and use the funds to resuscitating moribund industries, give facelift of schools, health Centres, Songhai farms, Create jobs human capacity development and pay off outstanding pensions and gratuities to retired civil servants.