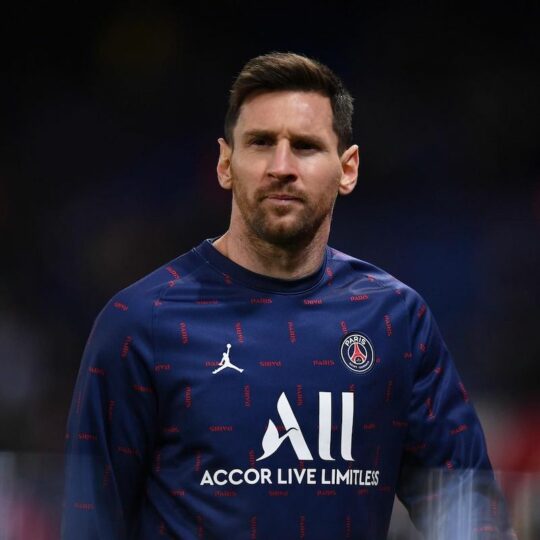 Lionel Messi showed against Nice he has the quality to become the world’s best player again, according to Paris Saint-Germain boss Christophe Galtier.

The Argentina international opened the scoring in PSG’s 2-1 Ligue 1 win at Parc des Princes on Saturday with a lofted free-kick from 22 yards that he had won himself.

That was Messi’s first direct free-kick goal for PSG since joining from Barcelona in August 2021 and the 60th of his career overall for club and country.

On the back of an underwhelming first campaign in the French capital, Messi has five goals and seven assists in his first nine Ligue 1 outings this season.

And after registering a goal in successive league games for the first time as a PSG player, Galtier has backed the seven-time Ballon d’Or winner to maintain his consistency.

“I have an incredible pleasure to see him every morning in training,” Galtier said in his post-match press conference. “He is playing well and is happy every day when he trains.

“He is a player who has always had a habit of scoring a lot of goals in a season. This year he’s regaining a taste for scoring and is becoming decisive for us.

“Whether he can be the best player in the world again, I’d say yes because he’s in incredible shape and he’s well prepared.

“He has a relationship with his teammates that makes him happy. When he’s happy, he performs; when he performs, he can reach the standards seen throughout his career.”

Messi’s sublime effort was canceled out by Gaetan Laborde two minutes into the second half and PSG were then largely frustrated by Nice, the side Galtier left to join PSG in July.

But Kylian Mbappe proved to be the match-winner from the bench with his 83rd-minute strike, coming from his only shot on target, as PSG leapfrogged Marseille at the summit.

Asked about his decision to start with Mbappe on the bench following his return from France duty, Galtier said: “He picked up a knock to the hip against Denmark.

“He returned on Wednesday and only had 48 hours to rest. He still had a hip hematoma today. He had this apprehension but still remained available to the team.

“I had the same discussion with Lionel when he returned to the group [from Argentina action]. Unlike Kylian, he didn’t pick up an injury during his time away.”

PSG now have 25 points after nine unbeaten matches to start the campaign, matching their previous best starts from the 2017-18 and 2018-19 campaigns.

However, it was not all good news for the Parisians as Renato Sanches lasted only 16 minutes after being brought off the bench, aggravating an injury problem.

“Renato felt a little stretch of his left leg as he slid,” Galtier said. “It’s his left leg, so on the side where he was previously injured.

“He was returning from injury and preferred to come off rather than stay on. Regarding the seriousness of the injury, it is still far too early to know.”