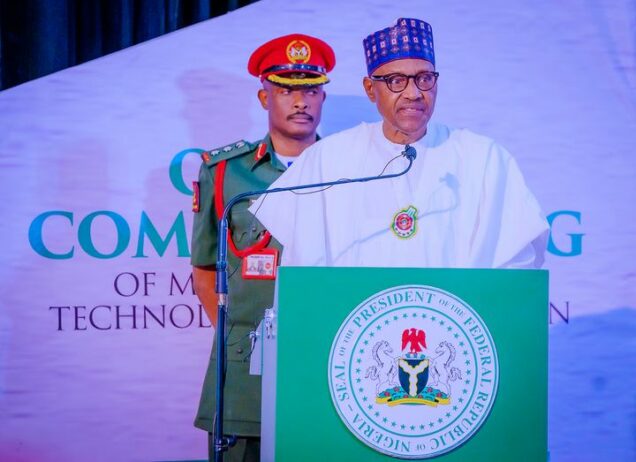 President Muhammadu Buhari has inaugurated the Technology and Innovation Complex of the National Agency for Science and Engineering Infrastructure (NASENI).

The Technology and Innovation Complex has been named after the president.

Speaking at the event, the president declared that NASENI would be a pivotal legacy his administration would bequeath to the next administration in 2023.

He stated that the agency, under his administration, was being repositioned to become a Technology and Innovation Hub for national development.

“This is one pivotal legacy of this administration. With this complex and the available facility, the future of our national competitiveness among global economies is promising.

”We are sure that these advanced Science and Engineering Core facilities will assist our nation in the attainment of the African Union’s 2063 Agenda and the United Nations’ Sustainable Development Goals, 2030,” he said.

While lamenting NASENI’s inability to reach her full potential over the years, Buhari pledged his administration’s determination to reverse the trend.

“NASENI has a long history of establishment and has been in existence for over 30 years now, but the agency has been facing so many challenges that were mitigating against the realisation of her full potential in line with the Act that established the agency.

”Under my chairmanship, NASENI is undergoing a reinvention and transformation to become a technology and innovation hub for our national development.

“Consequently, we have strategically repositioned NASENI to develop local capacity in machine building and fabrication, which is critical to Nigeria’s industrial development.”

According to Buhari, the recent awarding of 250 Czeck Koruna, or 10.5 million dollars, in R&D grants to Nigeria demonstrates that his administration’s transformation is yielding results in the creation of a competitive agency.

“NASENI, under my watch as the Chairman of the Governing Council, has lived up to its expectations and has performed well.

“The agency had invented useful and historic intelligence and defence-related equipment and devices and had engineered, in collaboration with reputable organisations, an armoured personnel carrier with advanced features and a mine-resistant, ambush-protected APC, among others,” he further stated.

Buhari also expressed delight that NASENI was advancing the agricultural self-sufficiency, energy, power, and homegrown technology programmes of this administration through its fabrication of machinery, equipment, and devices.

According to him, the Agency is currently implementing Smart Irrigation Projects for multi-crop season farming; the National Tractor Recovery, Rehabilitation and Redeployment Innovation, in collaboration with Nigeria Incentive-Based Risa Sharing System for Agricultural Lending,

He stressed that “the assembly of two helicopters toward the first Made-in-Nigeria helicopter and the development of solar cells for 100% solar module production, using local raw materials, are among the patriotic contributions to Nigeria’s transition to a manufacturing economy.”

Buhari reiterated NASENI’s relevance as a critical agency for the maintenance and sustainability of the nation’s infrastructure.

The president said: “The present administration has invested heavily in diverse infrastructural facilities: roads, rails, water, and aviation, among other sectors of our economy.”

“After this administration, the resourcing and sustainability of these critical infrastructures will present a challenge on a medium- to long-term basis.

“But, with our deliberate repositioning of NASENI to be at par with other similar agencies of government across the world and optimal performance, we are convinced that the future maintenance of our key national infrastructure is assured.”

Buhari also lauded the Executive Vice Chairman of NASENI, Prof. Mohammad Haruna, for his exemplary leadership, dynamism, and foresight in advancing the cause of the agency.

He said, “I commend you and direct the conferment of the Excellence Service Award on you and a National Honour of Officer of the Order of the Federal Republic, which is to be conferred on you at the last Federal Executive Council of December 2022.”

In his welcome address, the Executive Vice Chairman, acknowledged Buhari’s commitment to the deployment of Science, Technology, and Innovation (STI) to the centre stage of Nigeria’s socioeconomic activities, noting that it was the first time a Nigerian president was visiting the agency.

Haruna said, “You are the first and only Head of Government of the Federal Republic of Nigeria to have ever paid a visit to any facility of NASENI across the country in the 31 years of the agency’s existence.”

“You have already demonstrated a shift away from a commodity-based economy by prioritising innovations and inventions in the direction of manufacturing and a knowledge-based economy.”

He assured the president of the agency’s commitment to contributing towards overcoming the country’s development challenges.

“Furthermore, NASENI is ready and will God willing, soon provide innovative technology solutions to stopping crude oil theft and bunkering, vandalism of power lines as well as surveillance and monitoring devices for our rails, roads and seaways,” he said

The goodwill message from Senate President Ahmed Lawan was delivered by Sen. Uche Ekwunife, Chairman of, the Senate Committee on Science and Technology, while the Minister of the Federal Capital Territory, Muhammad Bello, was among the dignitaries at the event.