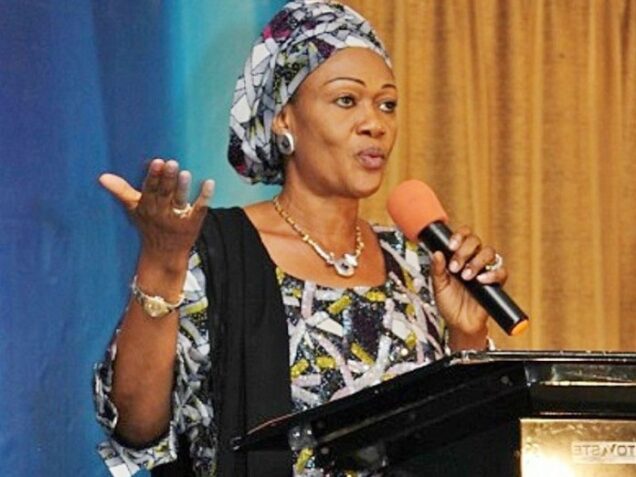 The wife of the All Progressives Congress (APC) presidential candidate, Sen. Oluremi Tinubu, said the Muslin/Muslim ticket of the party will set a new tone in Nigeria’s political landscape come 2023.

Tinubu said this on Wednesday during the APC South-West Women’s presidential rally at Mobolaji Johnson Arena in Lagos.

She said that the country, in no distant time, would also witness Christian/Christian ticket.

”I bring you warm greetings from the First Lady, Her Excellency, Aisha Buhari. She sends love to Lagos and wishes you well and to the Governor that is making things work in Lagos State.

”We thank you for coming out in large numbers despite the challenges. My coming here is another homecoming. About 23 years ago, God blessed my husband to become the Governor, I supported him as the first lady,” she said.

Tinubu thanked the people of Lagos Central for sending her to represent them, as she remained the first woman to emerge as a senator three times.

She described it as a wonderful opportunity, as since 2007 when her husband left office as the Governor of Lagos State, she had been working for the people of the state.

”God rewards good work. What is happening to us is God that is doing this. He pleases people without people paying attention but heaven pays attention.

”As regards Muslim/Muslim ticket, this one will set the tone for the future. Sometime in the future, we will have a Christian/Christian ticket. What God has done is marvelous in our land,” Tinubu said.

The Wife of Lagos State Governor, Mrs. Ibijoke Sanwo-Olu, said that Nigeria needed somebody of political sagacity as Tinubu to manage the affairs of the nation in 2023.

Sanwo-Olu said that President Muhammadu Buhari had laid the right foundation for progressive governance, as he had been responsive, progressive, and totally committed to the needs of the people, especially women and children.

She said that as women, there was a strong need to use the 2023 elections to vote for APC across all levels, for consolidation and continuity of the remarkable work and achievement of the present administration.

According to her, it is crystal clear that the continuity of the APC government is the sure way to greater progress.

”We are delighted to receive you all as we flag off the Tinubu/Shettima Women’s Presidential Campaign in the South-West.

”At this point in time in our democratic experience and history, Nigeria needs the financial expertise, intellectual acumen, progressive capacity, and political sagacity of Asiwaju Bola Ahmed Tinubu to manage the affairs of our great country.

”Asiwaju has a track record of outstanding performance. He has the astonishing ability to identify talents and galvanise them to catapult our nation to the deserved height and rightful position in the comity of nations. He has done it in Lagos and he will do it in Nigeria.

”The commitment of the Tinubu-Shettima Presidency is that all Nigerians, regardless of age, colour, gender, ethnic, religious, and political affiliations, will be supported to achieve their dreams and aspirations.

”They are people-friendly, reliable, and trustworthy. The Tinubu-Shettima Presidency will do everything humanly possible to increase opportunities for women in politics and decision-making,” she said.

Sanwo-Olu said that indeed, Nigerian women could count on the Tinubu/Shettima Presidency, as it is a ticket that would ensure gender justice, fairness, and equitable participation of women in governance and the political process.

She said that it is a ticket that would close gender gaps and address the many challenges women still confront in public and private.

The APC National Women Leader, Dr. Beta Edu, said that the mission of the women was simple, which was to win at every ward and deliver 40 million votes for Sen. Tinubu.

Edu urged all to get their PVCs ready and vote for Tinubu, as he would empower women and provide jobs for the youth.

A representative of the Youths Ambassadors, Comfort Olabare, said that the State Governor, Mr Babajide Sanwo-Olu’s, initiative on leadership training had impacted greatly on the youth.

Olabare also urged women to vote for Tinubu and the governor, noting that their emergence would address unemployment and poverty in the land.