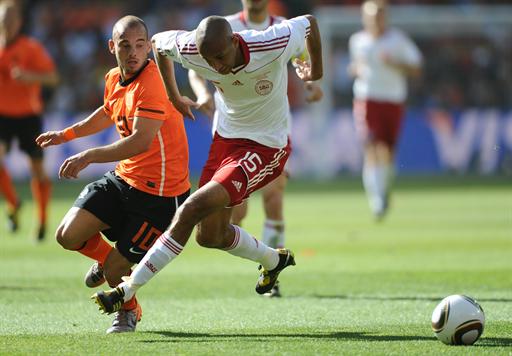 The tournament is well into the Group matches as the battle for second round places heats up. On Saturday, the Dutch meet Japan followed by Ghana against Australia and Cameroon against Denmark in Group E.

Netherlands v Japan: Confident Japan defy group favourites
Riding on the back of their historic first ever victory at the World Cup outside their own country, the Japanese can take another massive step towards the last-16 if they can get something from their Group E showdown against the Netherlands. Star winger Arjen Robben looks set to miss out again for Holland while Japan coach Takeshi Okada will likely keep faith with the same team that beat Cameroon 1-0. The Netherlands were workmanlike in their 2-0 win over Denmark but will be hoping to finetune their game and take a stranglehold on the group and guarantee top spot.

Ghana v Australia: Australia in must-win situation against Ghana
Australia are expected to be fired up after their 4-0 drubbing at the hands of Germany and desperately need maximum points to keep alive their second round chances. Dutch coach Pim Verbeek came in for a barrage of criticism following the opening match and to add insult to injury, star player Tim Cahill is suspended after being sent-off against the Germans.

Ghana who reached the second round four years ago can almost guarantee a repeat performance if they can build on their 1-0 win over Serbia and beat the Soceroos.

Cameroon v Denmark: Indomitable Lions hope to roar against Denmark
Cameroon need to dramatically improve on their dismal 1-0 defeat against Japan but face a Danish team who impressed against the Netherlands despite a 2-0 defeat and who will certainly pose major problems. Lions coach Paul Le Guen faces another pressure match and will have to decide whether to play Samuel Eto’o on the right wing where he was largely ineffective in the opener or play him up front where he has plundered most of his goals.