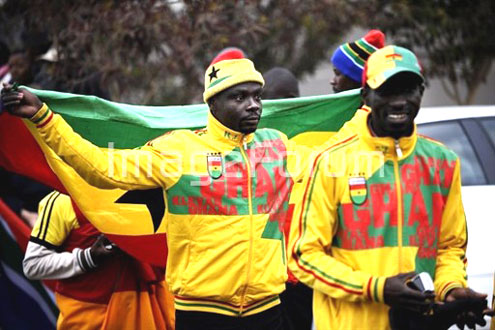 Ghanaians turned out in their thousands to cheer their soccer teamâ€™s arrival home late yesterday spraying their jet with water cannons and rolling out the red carpet for the World Cupâ€™s surprise quarter-finalists.

The â€˜Black Starsâ€™ matched pioneers Cameroon (1990) and Senegal (2002) in reaching the last eight, but spurned a golden chance to become Africaâ€™s first semi-finalists when they squandered a last-minute spot-kick against Uruguay.

Striker Asamoah Gyanâ€™s missed penalty after a handball on the line denied Ghana a goal with both teams tied at 1-1, sending the match into a penalty shoot-out which Uruguay won 4-2.

There was little bitterness among the revellers at the airport, however, many of whom had draped themselves in the countryâ€™s national colours of green, gold and red.

â€œThe Stars fought gallantly, not only making Ghana proud, but the entire African continent,â€ said Felicia Acheampong, a 53-year-old teacher who was part of the celebration.

Huge crowds had flooded the airport hours before the team landed, blasting vuvuzelas, singing and drumming in a carnival atmosphere.

â€œItâ€™s a way of remembering the performance of the Stars,â€ he said.

Ghana, whose chutzpah at the continentâ€™s first World Cup won many admirers, were Africaâ€™s sole hope after Ivory Coast, Cameroon, Nigeria, Algeria and hosts South Africa were knocked out in the group stage.