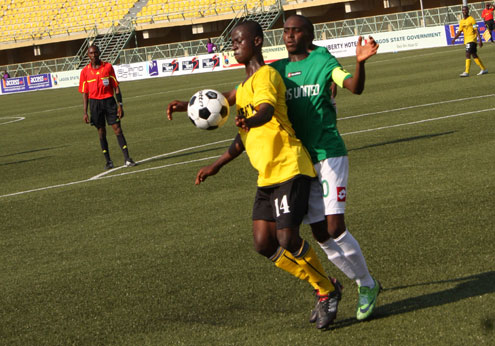 Despite his teamâ€™s 1-7 scandalous drubbing in the hands of SuperSport United of South Africa in the ongoing Lagos International Youth Cup at the Teslim Balogun Stadium, Lagos, Nigeria skipper of Lagos United, Thomas Kanu declared that they are still gallant losers.

The former Oriwu College student said football to them is not always about winning but that they are contented with the exposure they got playing against teams from other countries, and this would go a long way in helping them in future international competitions.

Kanu, popularly called â€œDecoâ€ by his admirers was speaking after Lagos United were reduced to nothing by their opponents from the â€œRainbow Countryâ€.

According to the lanky forward â€œFootball is not all about winning, it is a thing of joy that we were picked to play among the millions of youths in Lagos State to play against teams from South Africa, Ghana and Holland. Even if we lost, at least we have gathered experience and exposure and I hope in the near future we would have the opportunity to represent, not only the state, but the countryâ€.

The South Africans drew the first blood through Khotso Mokhele in the 17th minute of the encounter and as play continued, Jerry Mxabo increased the tally to two and a few minutes later, the referee ended the first half of the match.

At the resumption of the second half, the South Africans, who are the table toppers turned on the heat on the Nigerians and it yielded result as they got their third goal through Mxabo again, paving the way for them to overrun the Nigerians, who were already losing steam due to poor marksmanship. The coach Joe Erico tutored side let in four more goals to take the tally to seven. And a few minutes to the end of the encounter, Nigeria, who are the hosts, got a consolatory goal.