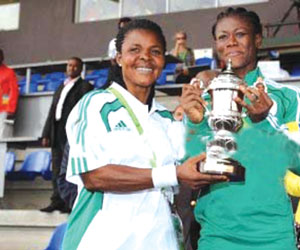 The victorious Super Falcons at the just concluded African Women Championship, AWCÂ  in South Africa were due back in Nigeria after winning the coveted trophy for aÂ  record sixth time.

The Falcons reclaimed the women championship with a 4-2 victory over the Guineans atÂ  the Sinama Stadium on the outskirts of Johannesburg, South Africa yesterday. It wasÂ  also a sweet revenge for the Nigerians against a team that dethroned them two yearsÂ  ago. The Falcons also scooped the Top Scorer award, Most Valuable Player award asÂ  well as the Fair Play trophy in a tournament they dominated from start to finish.

Falcons and their technical crew led by Uche Eucharia were scheduled to arrive theÂ  Murtala Muhammed Airport, Ikeja, Lagos, Nigeria aboard Arik Airline this afternoonÂ  to a rousing welcome from soccer loving Lagosians, who were so glad with theirÂ  routing of Equatorial Guinea in the final of the AWC.

The victorious team are being received right now by the Deputy Secretary General ofÂ  Nigeria Football Federation, NFF, Dr. Emmanuel Ikpeme. The team would be treated toÂ  a brief reception at the airport after which they would be driven from theÂ  international wing of the airport in a motorcade to the MMA2 from where they wouldÂ  connect a local flight to Abuja.

The Acting Secretary General of the NFF, Alhaji Musa Ahmadu, would received the teamÂ  at the Abuja International Airport where another round of reception would hold forÂ  the new African women champions.

Speaking of her teamâ€™s heroic exploits at the AWC, a jubilant Coach Eucharia said:Â  â€œWe went to South Africa to win and we won.â€Â  Striker Desire Oparanozie added: â€œWeÂ  were determined to win this trophy and we gave it our best shot.

After the Abuja reception, the Falcons would be lodged in a hotel in readiness forÂ  their decamping tomorrow to celebrate the Sallah with their families.

P.M.Sports gathered that the team would reconvene on Friday in Abuja to kick startÂ  their preparation for an international friendly game with the reigning worldÂ  champions, Germany next week.