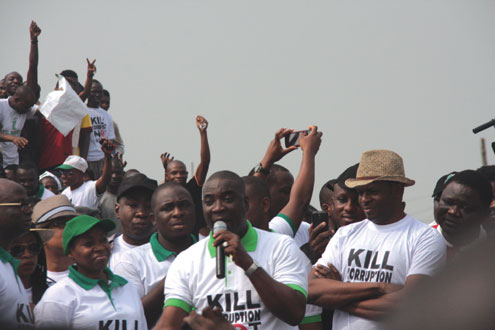 •KI performing at the rally.

The artistes, who entertained Nigerians at the park, also sent messages to the President Goodluck Jonathan-led administration to revert to the N65 per litre pump price of petrol.

Femi Kuti told Nigerians that they are now witnessing what Fela told them years back by saying that ‘dog dey work baboon dey chop’ among other things .

Through his popular song Under Pressure, released in the 80s, Kimono told the Nigerian government that the people are under pressure and that the government should not toy with their future.