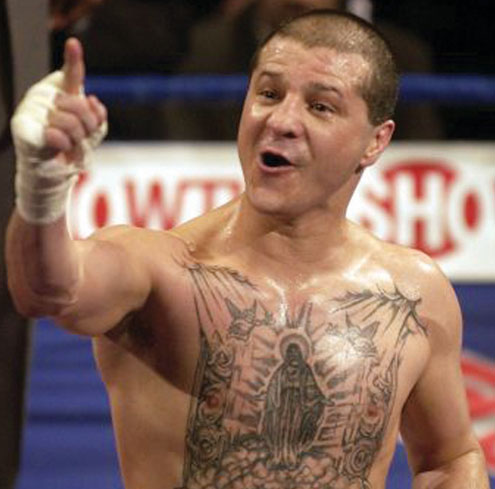 Five-time world boxing champion, Johnny Tapia has died at the age of 45.

The fighter’s body was discovered by a family member at his home in Albuquerque, New Mexico on Sunday evening.

Authorities were called to the house at about 7.45 p.m local time, according to police spokesman Robert Gibbs.

Gibbs insists the death does not appear to be suspicious and reveals an autopsy will be performed in the coming days.

Tapia’s longtime friend, former sportswriter Dennis Latta, tells KOB.com, “(His family is) just distraught. He’s come so close so often to death, so it’s hard to believe that it’s finally happened… To realize that now he’s gone, it’s really a surprise, I thought he was just invulnerable, it was water off a duck’s back every time he came close to death.”

Tapia won five championships in three weight classes, and his last fight was almost a year ago, when he defeated Mauricio Pastrana.

The star’s success was marred by drug addiction, alcohol and depression; he was hospitalized for three days in 2007 after an apparent cocaine overdose.

The day after he was admitted, his brother-in-law and nephew were killed in a car accident on their way to visit him.