Walcott makes a point to Wenger at West ham 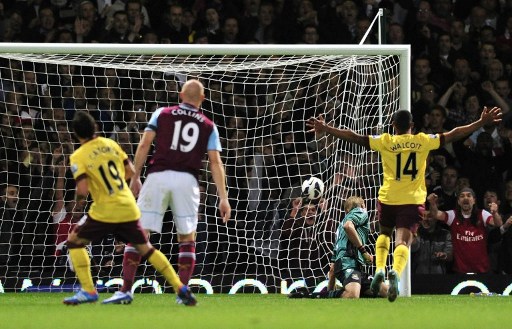 Theo Walcott sent a message to Arsene Wenger as the Arsenal star came off the bench to inspire his side’s 3-1 win at West Ham on Saturday.

Not for the first time this season Walcott found himself left on the substitutes’ bench, but the England international’s second-half introduction played a key role in Arsenal’s third Premier League win of the campaign.

Mohamed Diame had handed West Ham the lead in the first half before French striker Olivier Giroud ended his Premier League goal drought to equalise just before half-time.

Walcott, who is yet to sign a new contract after making it clear to Wenger he wants to be used as a forward rather than a winger, came on to put Arsenal ahead with a clinical finish in the second half before Santi Cazorla completed the win late on to lift the Gunners into fifth place.

Giroud, a £12 million signing from Montpellier, almost ended his wait for a first league goal when his low shot was pushed aside by West Ham goalkeeper Jussi Jaaskelainen inside two minutes.

If that was warning sign, West Ham clearly hadn’t learned their lesson as they rode their luck to remain on level terms.

But for all Arsenal’s superiority, it was West Ham who opened the scoring against the the run of play in the 21st minute.

George McCartney’s pass looked to have sent Diame down a blind alley, but the Senegal midfielder showed quick feet to drift inside Aaron Ramsey before curling home a fine opening goal.

Diame had been booked for his goal celebrations and the former Wigan midfielder threatened to go from hero to zero with a rash challenge on Mikel Arteta within minutes.

Referee Phil Dowd, however, let Diame off with a warning.

But Arsenal wouldn’t have to wait long before they hauled themselves level.

It was the least the Gunners deserved, but they still looked shaky defending set-pieces. That was evident when Kevin Nolan stole into yards of space, only to see his tame effort drift harmlessly wide on the stroke of half-time.

The pace of the game dropped in the second half and Ramsey’s air kick allowed Matt Jarvis time before the winger shot over on the hour.

But Arsenal, despite not being at their best, took a 77th minute lead when Giroud’s fine pass saw Walcott escape the offside trap to slide home.

Nolan wasted a chance when he fired over and with Wenger’s side needing the breathing space Cazorla provided it, crashing home a thunderous long-range strike from Walcott’s pass to clinch the win in the 83rd minute.