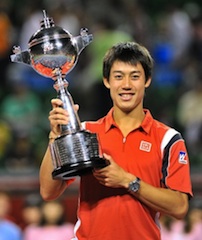 Tokyo, (AFP) Kei Nishikori has made history by becoming the first Japanese to win the Japan Open tennis tournament Sunday when he defeated young Canadian star Milos Raonic in the final.

The 22-year-old, who eliminated world number six, Tomas Berdych of the Czech Republic in the quarter-finals, pulverised Raonic’s serve-and-volley game to score a 7-6 (7/5), 3-6, 6-0 victory in his fourth career final on the tour.

He was the first player from the host nation to win the Japan Open since it was sanctioned by the ATP in 1973.

“I knew he has a very good serve, so I tried to move a step forward. My return was working really well this week,” Nishikori said. “I was able to cope with him using my returns…that was the key to the victory.

“I want to take a rest and enjoy this victory, but I must prepare for my next tournament in Shanghai,” added Nishikori, ranked 17th against Raonic’s 15th.

Raonic, who had lost only one service game in his previous four matches, lost another in the second game of the first set before breaking back in the fifth game.

Nishikori, missing two set points in the 12th game, stormed back from 0-3 down in the tie-breaker. He scored his second mini-break to take a commanding 6-4 lead before taking the set when Raonic’s backhand shot went wide.

The Canadian managed to pull off the only break to tie the contest at one set all. But in the final set, Nishikori broke him in the second game and dominated the rest of the battle for a surprisingly lopsided scoreline.

It was only Nishikori’s second title, following his maiden victory at Delray Beach in February 2008 when he become the second Japanese man to win a tour title.