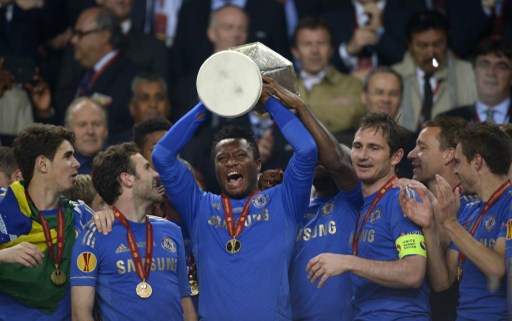 Branislav Ivanovic scored an injury time winner to give Chelsea a 2-1 victory over Benfica in the Europa League final in Amsterdam on Wednesday.

Fernando Torres opened the scoring for Chelsea on the hour mark before Oscar Cardozo levelled on 68 minutes from the penalty spot.

Club captain John Terry sat the game out with an ankle injury, but just as he had done after last season’s Champions League final, which he missed through suspension, he donned his full kit to lift the trophy alongside fellow Chelsea stalwart Frank Lampard.

“It’s a great feeling,” said Ivanovic. “This team deserved this, because we have had a very difficult season and a lot of games.”

More lasting is the statistic that they are only the fourth club to have claimed Europe’s three major trophies — including the now-defunct Cup Winners’ Cup — after Ajax, Bayern Munich and Juventus.

Chelsea’s interim manager Rafael Benitez, meanwhile, joins Giovanni Trapattoni as one of only two coaches to have won the trophy with two different clubs, following his 2004 success with Valencia.

“That was a great performance in the second half, against a very good team,” said the Spaniard, who has already fulfilled his primary objective of qualifying the club for next season’s Champions League, despite lingering opposition from fans.

“The players have worked so hard, all season. I am proud — it was not easy. I’m really pleased, really proud.”

The manner of defeat was cruel on Jorge Jesus’ enterprising side and means that Benfica have now lost seven consecutive European finals since claiming their last major continental crown in 1962.

“The Benfica fans were better than the Chelsea fans,” said Jesus. “They deserved a Benfica victory for their passion and their feelings and the patriotism they showed.

“This defeat is difficult for me because of the Benfica fans. For most of the 93 minutes, Benfica was always better than Chelsea.”

Benfica had seen their Portuguese title hopes seriously compromised in a 2-1 stoppage-time loss to Porto in their previous game, but they banished any fears about their mental state with an assured start to the game that bordered on insouciance at times.

Indeed, so authoritative were Benfica, and so lacklustre Chelsea, that only an apparent inability to shoot at the appropriate moment prevented Jesus’ side from taking the lead before half-time.

With languid former Chelsea man Nemanja Matic orchestrating Benfica’s attacks from a deep position, the English side were struggling to find a foothold.

They did not test Benfica goalkeeper Artur until Oscar put an effort straight at him in the 27th minute, although the Brazilian was almost deceived by a swerving Lampard shot that he palmed over the bar in unorthodox fashion seven minutes before half-time.

Cardozo had a header ruled out for offside early in the second half, and although the call was correct, it was extremely marginal.

Salvio saw a header fielded by Petr Cech in the 59th minute, but within seconds, the ball was in the Benfica net.

Cech’s long throw down the centre was helped on by Juan Mata and Torres showed superb strength and composure to hold off Luisao and then round Artur, delaying to send the goalkeeper down before rolling the ball home.

It was a Chelsea smash-and-grab goal plucked straight from last season’s Champions League textbook, but the lead was to last only eight minutes.

Cesar Azpilicueta handled Salvio’s header just inside the Chelsea penalty area and Cardozo drilled his spot-kick into the middle of the goal to claim his seventh goal in this season’s competition.

Cech had to produce a finger-tip save to prevent a half-volleyed lob by Cardozo from dipping beneath the crossbar, before Lampard almost gave the game a fairytale late finish with a 25-yard pile-driver that hit the bar.

Extra time beckoned when the fourth official raised his board to show three minutes of injury time, only for Ivanovic to send a header arcing over Artur from Mata’s corner and break Benfica’s hearts.