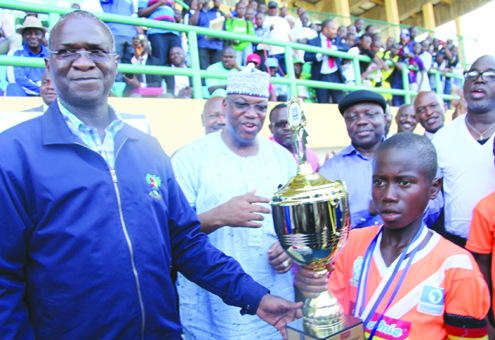 The boys from Warri defeated their counterparts from Uwa Model Nursery/Primary School, Benin City by 4-2 to lift the trophy at the annual tourney that came to an end yesterday at the Teslim Balogun Stadium, Surulere, Lagos.

Since its commencement in 2009, the competition had involved only schools in Lagos State, but the 2013 edition featured schools outside Lagos.

Governor Fashola commended the management of Channels Television, especially its Chairman/CEO, Mr. John Momoh, for what he described as a “wonderful initiative”.

According to Governor Fashola, who later performed the kick-off ceremony to herald the start of the finals: “The importance of this initiative is not lost on any one. In all ramifications, it is a wonderful initiative and that is why we are supporting it.”

Dr. Emmanuel Uduaghan, said the Delta State Government has been supportive of the initiative because, according to him, it is a foundation that portends a great future for Nigerian football.

He also thanked his Lagos State counterpart for lending support to the initiative.