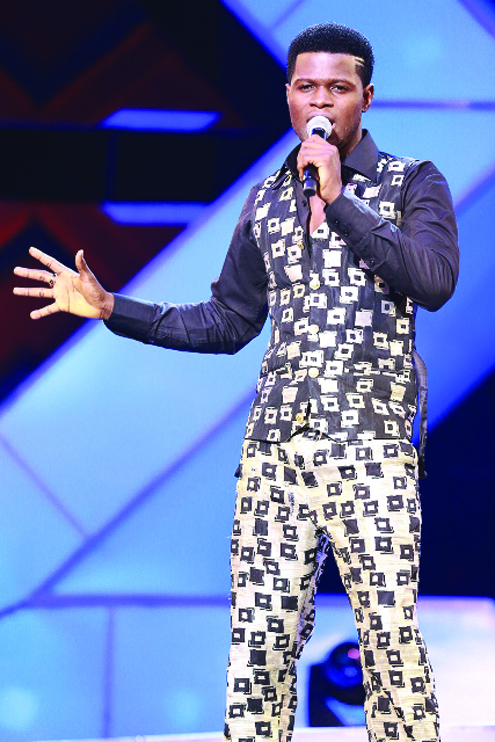 For Phillip Otuya, better known as Pheel, last weekend was his first time dropping into the Glo X Factor show Bottom Two and the eviction slab. He was unlucky and got the axe as he was evicted.

The 26 years old Pheel, who has been consistent and hard working since the beginning of the talent hunt show sponsored by Globacom, could not garner enough votes from viewers and fans. This placed him on the bottom rung of the contestants ladder alongside Vicky who joined him and had to sing for the judges to be saved during last week’s live show.

While Vicky was third time lucky, as she had been on the eviction slab on two previous occasions and got saved, Pheel was shown way out.

Rap star and one of the judges, M.I, for the first time in the show experienced a sad moment as Pheel, one of his three favourite contestants, lost out. He had voted to save Pheel after Onyeka Onwenu, another judge, had settled for Vicky.

For the very first time, the decider role was placed on the shoulders of Ghana’s music star and third judge, Reggie Rockstone, who voted to save Vicky and ended Pheel’s chase for the fame and fortune.

“It is very sad because the contestants and judges have worked so hard. They are now international. We advise them to be strong,” Onyeka said after the eviction.

M.I added, “I agree with Onyeka. These guys have made it this far out of thousands of talented people. Anytime, anybody leaves, it’s sad.”

With all the five male acts who made it to the Top 9 of the Glo X Factor gone, the chase for Glo’s N24m cash prize and Sony Music’s recording contract is now open to the four female contestants left —Vicky, DJ Switch, Princess Pat and Eshum.

Ghanaian entertainer and one of Glo ambassadors Irene Logan enlivened the live show with her superb performance.