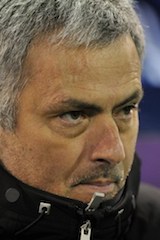 Mourinho: has a case to answer

Substitute, Nigerian striker Victor Anichebe struck a dramatic late equaliser on Tuesday to earn West Bromwich Albion a 1-1 draw as Chelsea were forced to settle for a lead of two points, not four, at the top of the Premier League.

Jose Mourinho’s team were far from being in the fluent and formidable form which has characterised their recent ascent to the summit, however once they led via Branislav Ivanovic’s goal in first-half added time at The Hawthorns they had looked on course for victory.

Yet Anichebe, on the pitch 14 minutes as a replacement for Morgan Amalfitano, had other ideas, with the Nigeria striker heading home in the 87th minute to secure a precious point which lifted the Baggies out of the bottom three.

The result gave both Arsenal and Manchester City, who each play on Wednesday, the chance to claim top spot.

West Brom, meanwhile, will take confidence from their third successive draw at home under new head coach Pepe Mel ahead of a meeting with fellow relegation battlers Fulham on Saturday week.

They have, though, still won just once in 16 league matches.

New arrival Thievy Bifouma, on loan from Espanyol, was handed a first Baggies start, yet the major piece of team news surrounded the inclusion by Chelsea manager Mourinho’s decision to field Ramires, who replaced Frank Lampard.

The Brazil international was roundly booed by the home crowd in what was the sides’ first meeting since he controversially won a penalty which earned the Blues an injury-time equaliser in November.

Despite their vastly contrasting recent form, it was a surprisingly even start to proceedings with Mel’s renowned pressing game frustrating the visitors.

It took Mourinho’s team until the 22nd minute to threaten when Samuel Eto’o’s cutback from the byline almost found the onrushing Ivanovic, with a combination of Gareth McAuley and Claudio Yacob doing just enough to avert the danger.

Mel had previously claimed victory over Mourinho when his Real Betis team pulled off a shock 1-0 victory over Real Madrid in November 2012.

His tactics appeared to be working against the Portuguese again and, with space squeezed in the Blues’ final third, a Willian long-range effort which flashed past the right-angle was as close as they came in the first half.

The hosts looked a side transformed to the one who toiled in the weekend defeat at Crystal Palace which saw them fall into the bottom three.

Pivotal to that change were rookie forward duo Thievy, 21, and Saido Berahino, 20, whose trickery and tireless chasing made them a handful for the Blues back four.

The pair contributed to the Baggies’ best opportunity of the half when Berahino’s cross was laid off to Chris Brunt by Thievy, yet the Northern Ireland international dragged his shot wide.

Chelsea always looked the more likely to score and the home side survived an anxious moment when Gareth McAuley sliced a Blues cross over his own crossbar.

However, their resistance was finally deep into the two minutes of added time when Willian’s corner was flicked on by David Luiz and the unmarked Ivanovic swept home from close range.

West Brom were out early for the second half, yet Chelsea made the more purposeful start upon resumption with Eto’o’s fierce strike repelled by Ben Foster.

Fernando Torres was introduced for Eto’o as Mourinho looked to finish off the game, yet Chelsea were given a scare late on when Thievy and Brunt both wasted openings.

And, just as it appeared the home side had run out of opportunities, Anichebe struck with a fine glancing header which crept in off the right post from Berahino’s teasing cross.

All The results Tuesday