The Power Of Touch 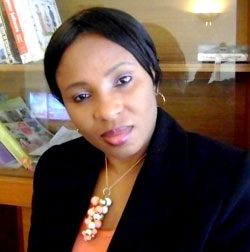 Touching is a fundamental human need facing people of all ages, tribe, culture, religion, status and class. Simply put, it is a need that cannot be ignored without painful or harmful consequences as the more frequent it occurs, the happier its recipients are.

It could as well be considered as basic as food, clothing and shelter- it is medicine to the soul.

People who work and live with animals have also been sensitive enough to identify the importance of touching and petting these creatures under their care.

For instance, I am not a dog freak, it was almost a bother to me whenever one came wagging its tail around me, I will exude irritation of all sorts until one day a friend, after watching me in my frustration whispered, “just touch the dog, it will go away.” Annoyed though, I decided to try but little did I know that was the beginning of our play (the dog and I). I didn’t particularly gain anything from this adventure but when it dawned on me that the dog enjoyed it, I had to do it for ‘her.’ (I’m not asking you to go about looking for dogs to touch, some can be very wild.)

Would you be shocked to hear that even babies crave touch? When I was undergoing antenatal classes as a new mother-to-be, the medical attendants took some time to explain to me that holding a child close to your chest has a unique influence on growth. As I had my first son, it was a bit amazing to see that the baby was given to me to cuddle before being taken for clean up. When asked why the baby was given to me before bath, ‘bonding…bonding…bonding,’ was the reply I got.

Babies who are deprived of touch could in a way be suffering from some kinds of deficiencies and may even die.

Research has revealed that there are specific life-giving hormones and chemicals created in the body in response to touch.

If babies love to be touched at this stage, how different do you think they could be as adults? It is generally believed that people who are often touched feel happier, loved, appreciated, safe, confident and accepted.

Some researchers have described the need for touch as skin hunger, insinuating the need to touch and be touched is an actual craving just like the desire for food and drink.

The desire for food and drink may be easily identified and related to because we think it is normal while on the other hand, people feel unsafe to disclose their desire for touch probably because it involves emotional expression. This does not, in a way, shield the manifestations of a touch-starved life.

When we are deprived of touch, depression, hallucinations, anxiety, boredom, irritability, pain, nagging, etc., set in. I am sure you can relate to one or more of these symptoms. Everyone does not react the same way, your response to grief depends basically on your ability to endure and adjust.

If we realise how essential touch is, we would be moved to increase the amount of touch in our intimate relationships as there is no yard stick to measure how touch impacts on our lives but we are certain it does.

For instance, the day you wake up hugging and kissing your spouse and children, some kind of joy seems to flow through the home, true or false? A touch of love is a powerful and subtle way to bring warmth to the relationship, while touch sometimes expresses feelings that mere words cannot convey, no matter how well presented.

Touch is one of the most powerful and sensitive of all senses. When done at the right time, place and mood, the result could be incredible.

Touch, as it were, means a different thing to man, woman and child.

For a man, the word touch is interpreted  as acceptance. Any man who has the slightest knowledge that he is being accepted, goes to any length to make his spouse happy. Naturally, a man is born into a world of competition and sure knows others are ahead of him, but the only support you can give is to make him feel he is great in his own capacity. Arms wrapped round your husband before he leaves for work simply conveys to him you appreciate his sacrifice for the family. A gentle touch tells the man “you are my hero.”

For a woman, you could almost be mistaken to believe touch is everything she lives for. Does this mean a woman is more sexually inclined than a man? She simply needs the assurance of LOVE. A woman counts touch as LOVE and this has nothing to do with sex, but just pure, gentle gestures.

Children simply thrive on touch. It means protection, love, care, confidence, etc., to them. Have you noticed that no matter how badly you had beaten a child, once you call him and give a hug, smiles return and play unfolds? The more you cuddle and express love to a child, the closer he will be to you, the more his desire to love others.

My husband and I hug the children daily, please try, it really works.