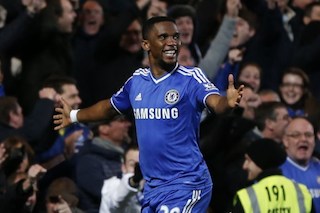 Quick-fire goals by Samuel Eto’o and Eden Hazard inspired Chelsea to a 4-0 win over Tottenham Hotspur on Saturday that sent them seven points clear in the Premier League.

Eto’o put Chelsea ahead in the 56th minute and Hazard added a penalty four minutes later after Younes Kaboul had been sent off for a foul on Eto’o, with Demba Ba adding a late brace.

Eto’o’s opener was gifted to him by Jan Vertonghen and both of Ba’s goals also stemmed from errors, as Spurs’ 23-year wait for victory at Stamford Bridge went on.

Chelsea now lead Liverpool and Arsenal by seven points, but both teams have a game in hand, while fourth-place Manchester City, who are nine points off the pace, have three fixtures to fulfil.

After Fernando Torres was injured in the warm-up, Eto’o came into the starting XI and he gave Spurs an early scare when he raced through and rounded Hugo Lloris, only for an offside flag to stop him in his tracks.

Hazard also took the ball past the Spurs goalkeeper moments later, but could only shoot wide, while at the other end, Nabil Bentaleb dragged wide from a promising position and Petr Cech saved from Sandro and Kaboul.

Spurs were very much in the game, but Vertonghen’s blind pass 11 minutes into the second period enabled Eto’o to run through and score.

The Cameroon star celebrated with relish, referencing manager Jose Mourinho’s recent comments about his age by staggering towards the corner flag like an old man.

Kaboul’s innocuous challenge on Eto’o saw him dismissed and enabled Hazard to add a second, before Ba struck twice in the dying stages.

His first, in the 88th minute, saw him pounce after Sandro was unable to cut out a low cross from Oscar and a minute later a calamitous back header from Kyle Walker allowed the Senegalese striker to complete his brace.

Victory took the defending champions to within nine points of fourth-place Manchester City, although they have played two more games.

“I thought both Robin (van Persie) and Wayne were excellent today, and Juan Mata and Adnan (Januzaj). But it also needed a good defensive performance as well, so all round we were pleased.”

West Brom sit above the relegation zone on goal difference alone after Cardiff City moved level on points with Pepe Mel’s side by beating Fulham 3-1 in a basement battle at the Cardiff City Stadium.

Steven Caulker scored twice for Cardiff, either side of a Lewis Holtby equaliser, before Sascha Riether’s own goal sealed a victory that left Fulham four points adrift of safety at the foot of the table.

“We have got nine games and 27 points to play for, which is a lot, but in our situation we have to win our home games like Cardiff have done today,” said Fulham manager Felix Magath.

Palace are only two points above the bottom three after losing 1-0 at home to Southampton, who prevailed thanks to a breakaway strike from Jay Rodriguez in the 37th minute.

Meanwhile, Jonathan Walters went from hero to villain for Stoke City in their 1-1 draw at Norwich City.

The Republic of Ireland international converted a 73rd-minute penalty to cancel out Bradley Johnson’s header, but was then sent off for an ugly foul on Norwich midfielder Alexander Tettey.