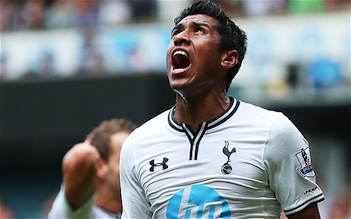 Tottenham Hotspur strengthened their push for an European place and kept Fulham trapped in the Premier League relegation zone with a 3-1 home victory.

Sidwell had an opportunity to get his team back into the game with 13 minutes remaining after Christian Eriksen had been penalised for handball, but his penalty was parried by Hugo Lloris.

Champions League qualification remains unlikely for Spurs, who are four points below fourth-place Arsenal, having played a game more, but they are now six points above Manchester United in the battle for a Europa League berth.

Felix Magath’s Fulham would have climbed out of the bottom three with victory, but instead they find themselves two points from safety, having played a game more than fourth-bottom Norwich City.

Fulham had won their previous two games and despite Magath making five changes to his starting XI, their momentum did not seem to be affected as they took the game to their hosts at a sunny White Hart Lane.

Snapping into challenges and pressing high up the pitch, they procured a clear sight of goal in the third minute, only for Hugo Rodallega to badly slice his shot after springing the Spurs offside trap.

Spurs threatened through Kaboul, who headed over after Fulham failed to clear a corner, but the visitors were quickly back on the attack, with Lloris rushing out to block Rodallega’s attempted lob.

The home side stepped things up around the half-hour mark, however, and after visiting goalkeeper David Stockdale had palmed an Aaron Lennon volley onto the post, Spurs went ahead.