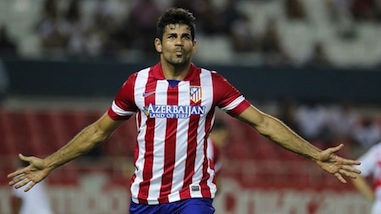 Spain forward Diego Costa has passed a medical at Chelsea ahead of a proposed £32m transfer from Atletico Madrid.

Chelsea met the buyout clause in the 25-year old’s contract with Atletico and he will now negotiate personal terms.

Costa won the Spanish La Liga with Atletico this season scoring 36 goals in 52 games. It was the first La Liga title for the Madrid club since 1996. They also reached the final of UEFA Champions League but lost 4-1 to Real Madrid.

The Brazil-born striker is in Spain’s World Cup squad along with Chelsea striker Fernando Torres and David Villa.

Chelsea manager Jose Mourinho derided his strikers for most part of last season saying he needed a “killer” striker. The club has been linked with Costa since the January transfer window.

Costa’s Atletico knocked out Chelsea in the semi-final of the Champions League.

“We have to try to win as a team, to improve as a team, but also add the attacking player with that killer instinct,” Mourinho said last month.

Mourinho will hope that Costa will go some way towards addressing that problem having enjoyed a prolific campaign with Atletico.

Costa scored 27 goals in La Liga and only finished third behind Real Madrid’s Cristiano Ronaldo (31) and Barcelona’s Lionel Messi (28) on the list of top goalscorers.

Born and raised in Brazil, Costa made two friendly appearances for his country of birth before he became a naturalised Spaniard.