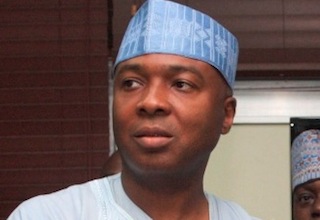 Senator Bukola Saraki has vowed that the All Progressives Congress (APC) will put an end to oil theft in Nigeria if voted into government in 2015.

The former governor of Kwara state stated that stopping oil theft will be one of the priorities of Nigeria’s main opposition party. On his Twitter page on Sunday, Saraki wrote using the #OilTheft: “At $105 per barrel for crude, Nigeria is not saving, PDP and APC states barely meeting obligations. What will happen if Crude falls below $90?” he quizzed.

He then asserted that Ghana had increase its output in recent years while that of Nigeria was dwindling at a frightening pace. “Oil field in Ghana that does 100k Barrels a day, all of a sudden started delivering 400k Barrels. Now exposed 300k is Nigeria’s stolen oil,” he wrote.

Saraki, representing Kwara Central in the senate then stated categorically that the APC will put an end to oil theft, adding that, he should be held responsible if it does not happen. “I say it with ALL confidence. Regardless of whoever becomes APC Presidential candidate, if HE/She becomes president. We will STOP OIL THEFT,” he said.

He said oil theft in Nigeria was only made possible because the present government backed it. “Stopping #OilTheft make it impossible for them to be able to move or sell the oil. People are stealing because they have government backing,” he tweeted.