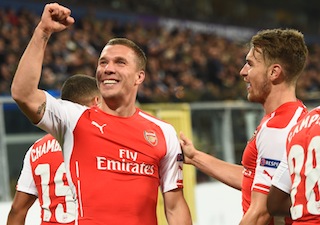 Podolski: Wenger says he is not for sale

Late goals by Kieran Gibbs and Lukas Podolski handed Arsenal a dramatic 2-1 win away to Anderlecht in their Champions League clash in Brussels on Wednesday evening.

An Andy Najar header in the 71st minute looked set to give the Belgian champions a rare European victory at the Constant Vanden Stock Stadium until Gibbs volleyed in a Calum Chambers cross with a minute left.

Substitute Podolski then struck a minute into injury time to seal all three points, to the great relief of Gunners’ manager Arsene Wenger on the night of his 65th birthday.

After a run of just two wins in nine games in all competitions, it looked set to be another evening to forget for Wenger, but the Frenchman can breathe a sigh of relief after a result that leaves the Premier League club in a strong position in Group D.

Arsenal sit three points behind leaders Borussia Dortmund, who were convincing 4-0 winners away to Galatasaray in the night’s other game, but are five clear of the sides below them and well on course for a place in the last 16 with the reverse fixture with Anderlecht to come next.

Besnik Hasi’s side, in contrast, were left deflated after suffering a sixth consecutive home defeat in the group stage.

The visitors had been forced to hand a Champions League debut to 22-year-old Argentinian goalkeeper Emiliano Martinez with regular custodian Wojciech Szczesny suspended following his sending-off in the win against Galatasaray three weeks ago and would-be replacement David Ospina out injured.

However, Martinez had nothing to do in the first half, as Anderlecht’s limitations were exposed — they defended doggedly and competed well, but failed to produce a single shot on target.

Nevertheless, Arsenal were similarly lacking in inspiration, despite the lively running of Danny Welbeck and a few crafty Jack Wilshere passes.

Things improved for Wenger’s men within five minutes of the restart though as Santi Cazorla’s free-kick found Alexis Sanchez unmarked in the area. However, with his back to goal, the Chilean’s header was blocked by goalkeeper Silvio Proto.

Cazorla was then denied by Proto after cutting into the box from the left with 63 minutes played, and that was to prove a costly miss by the Spaniard as Najar put the hosts ahead eight minutes later.

The Honduran winger exchanged passes with Dennis Praet before continuing his run into the box and heading the cross that followed low into the right-hand corner of Martinez’s net.

It could have got embarrassing after that for Arsenal, with Anthony Vanden Borre hitting the bar and Matias Suarez being denied by his compatriot Martinez moments after coming off the bench.

However, from nowhere Arsenal levelled in the 89th minute when a Chambers cross from wide on the right travelled all the way to the back post, where left-back Gibbs connected first-time on the volley to leave Anderlecht ‘keeper Silvio Proto helpless.

The momentum had now swung their way, and Arsenal stunned the home support when Sanchez’s low ball into the danger area was turned home by Podolski, much to the relief of the visiting fans.