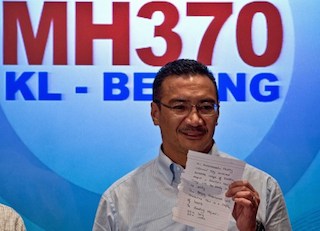 Hishammuddin Hussein: optimistic that MH370 will be found

Malaysia’s Defence Minister Hishammuddin Hussein said Wednesday his country was determined to find missing Flight MH370, as he was briefed by Australian officials leading the complex search deep in the Indian Ocean.

Hishammuddin, who is in the Western Australian port of Fremantle to inspect one of the search ships, the GO Phoenix, said the passengers and crew on board the Malaysia Airlines jet “remain in our thoughts and also in our prayers”.

“We must continue to hope because sometimes hope is all we have,” Hishammuddin told reporters.

The passenger aircraft was carrying 239 people, about two-thirds of them from China, when it disappeared en route from Kuala Lumpur to Beijing on March 8. No sign of the Boeing 777 has ever been found despite a massive air and sea search.

The jet is believed to have crashed into the southern Indian Ocean after inexplicably veering off course.

Hishammuddin was acting transport minister when the plane went missing and led Malaysia’s search for the jet before Liow Tiong Lai replaced him in the transport portfolio in June.

During his visit he toured the GOPhoenix, a Malaysian-contracted vessel which is conducting the underwater search using sophisticated sonar systems.

The renewed underwater probe began in early October and more than 1,200 square kilometres (463 square miles) have so far been scoured without success, the Australian Transport Safety Bureau (ATSB) said.

GO Phoenix is expected to leave for the Indian Ocean search site on Thursday after its resupply in Fremantle.

The Australian-contracted Fugro Discovery departed the port last week and is set to arrive in the search zone Wednesday, said the ATSB, which is leading the search.

The Chinese survey ship Zhu Kezhen, which has since left the search zone, and the Australian-contracted Fugro Equator have been mapping the seabed since May before the underwater hunt.

The Fugro Equator is expected to finish its seabed mapping duties on Friday before it is outfitted with a sonar system so it can join the underwater search.

Hishammuddin met officials from the Joint Agency Coordination Centre, the Australian agency coordinating information about the search. He said Malaysia was dedicated in its support for the MH370 search.

“All that could have been done to find the plane at this point has been done,” he said.

“This is it, the next phase. The search goes on.”