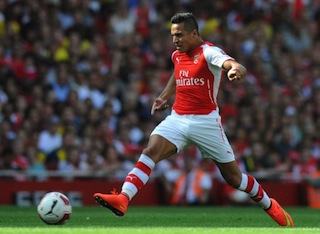 Alexis Sanchez scored twice as Arsenal beat Sunderland 2-0 at the Stadium of Light on Saturday to ensure veteran manager Arsene Wenger avoided his worst start to a Premier League season.

Chile forward Sanchez seized on two defensive errors to take his tally to eight goals in 15 appearances for the Gunners since his £30 million ($50.4 million, 37.6 million euros) pre-season transfer from Barcelona.

Victory was just Arsenal’s second Premier League win in their last eight games and third in nine overall this term as they took their points tally to 14, eight behind leaders Chelsea.

Such was Arsenal’s dominance, they had no need to call on Theo Walcott.

The England international made his return to the squad as an unused substitute after a nine-month absence following a serious knee injury suffered against Tottenham Hotspur in the FA Cup in January.

Sunderland restored a degree of pride after last week’s 8-0 humiliation at Southampton.

However, their latest defeat left them in danger of dropping into the bottom three if north-east rivals Newcastle avoid defeat at Spurs on Sunday.

Arsenal had been in danger of posting their lowest points total in the opening nine games to a campaign under French boss Wenger had they failed to win on Wearside for the fourth consecutive season.

But they rarely looked back once Sanchez put them ahead in the 30th minute.

Former Sunderland loan striker Danny Welbeck had already fired narrowly over from the edge of the area after latching onto a Santi Cazorla pass, when Sanchez rewarded the visitors’ dominance with the opening goal as the half hour mark approached.

It arrived courtesy of a mistake from veteran Sunderland defender Wes Brown, who badly mis-hit an attempted back-pass from near halfway.

An alert Sanchez pounced on the loose ball to sprint 30 yards with Brown in fruitless pursuit, before chipping right-footed over exposed goalkeeper Vito Mannone to find the net from the edge of the area.

Arsenal went close to doubling their advantage before the break, firstly through Cazorla’s left-foot effort from 20 yards which skidded across the face of goal and narrowly wide.

Soon after, defender Calum Chambers out-sprinted the Sunderland backline to see his shot from a narrow angle blocked by former Gunners keeper Mannone, as the hosts kept their half-time deficit to a single goal.

Sunderland, who’ve won just once in 22 league meetings against Arsenal, made a modest two changes to the side to suffer the club’s heaviest defeat for more than 30 years at St Mary’s Stadium.

While Sunderland’s effort against Arsenal couldn’t be questioned, they carved out precious few chances in a defeat that left them with just one league win so far this season.

They had a hopeful penalty appeal turned down early on when Jack Rodwell’s header struck defender Per Mertesacker on the arm.

And it took until early in the second half before they had an attempt on target, when Rodwell’s header from 12 yards was comfortably saved by Wojciech Szczesny.

While there was only one goal between the sides, there remained hope for Sunderland, and Arsenal’s Polish keeper was up to the task when Seb Larsson let fly from 25 yards around the hour mark.

Poyet’s side inevitably left gaps in search of an equaliser and the second goal arrived in stoppage time when Mannone, making a hash of Santiago Vergini’s hurried back-pass, was dispossessed by Sanchez, who slotted the ball into an empty net from a yard out.