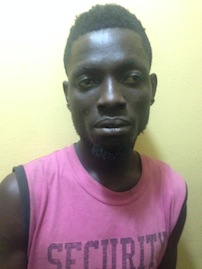 A driver of a commuter bus, locally called danfo, has been sentenced to 10 months imprisonment by the Special Offences Court in Alausa, Lagos, southwest Nigeria, for driving against traffic in violation of the Lagos State Traffic Law 2012.

The driver, Sheyi Adedeji, 27, who hails from Ikirun, Osun state, was arrested by officers of the Lagos Taskforce on Environmental and Special Offences (Enforcement) Unit on Tuesday and arraigned in court for violating the Road Traffic Law of Lagos State.

Adedeji was driving a commuter bus with registration number KSF 125 XM against traffic at Iyana Ipaja area of Lagos when he was arrested and detained at the taskforce office before he was arraigned.

Adedeji was charged with two-count charge of dangerous driving and driving against traffic.

He pleaded guilty to the offences and was duly sentenced by a magistrate to 10 months imprisonment. His sentence was with the option of paying N150,000 plus community service to be carried out at the place of arrest or remain in jail for 10 months.

His bus has been forfeited to the Lagos State Government.

Taskforce Chairman, Bayo Sulaiman told P.M.NEWS that driving against traffic is a grave offence punishable under the Road Traffic Law of Lagos.

He warned drivers, especially of commuter buses, to desist from plying one way as anyone caught would not be spared, saying that the sentence of the convict would serve as deterrent to others who might want to flout the state’s traffic law.

Sulaiman added that there is zero tolerance for one way drive in the state because, apart from causing traffic, many precious lives had been lost through one way drive.

“We are warning other recalcitrant drivers to beware, as the taskforce would go after them and ensure that they are brought to book,” he said.