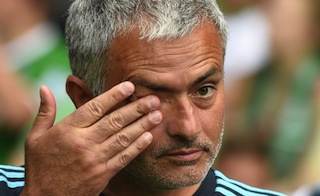 Chelsea came from behind to draw 1-1 away to Maribor in the Champions League on Wednesday and then squandered a gilt-edged chance of victory after the Slovenian side had threatened to pull off the shock result of this season’s competition.

The hosts should have gone 2-0 up but Luka Zahovic somehow contrived to miss an open goal as the game entered its final 20 minutes and were made to pay as Nemanja Matic equalised to spare the blushes of manager Jose Mourinho’s team.

Chelsea then squandered several chances before Eden Hazard won a penalty with five minutes remaining after being brought down in the box by Mitja Viler.

Hazard took the penalty himself but impressive goalkeeper Jasmin Handanovic dived to his left to save the spot-kick.

Ibraimi’s curling shot from the edge of the box had given Maribor the lead but Matic drew Chelsea level when he struck from close range afer good work by John Terry following a corner.

Chelsea could have won the match late on but Handanovic made excellent saves to deny both Hazard and Diego Costa.

But in an open game, Maribor had their chances to seal what would have been a stunning win, with striker Marcos Tavares shooting wastefully wide from the edge of the box with 10 minutes left.

Then came the penalty chance and, on a night of surprises, none was greater than Hazard’s failure to make it 2-1.

Had Chelsea — the 2012 Champions League winners — beaten Maribor and other results gone their way, they would have qualified for the last 16 of this season’s competition with two games to spare.