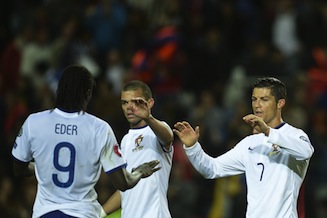 In Group I, Real Madrid star Ronaldo scored in the 72nd minute as Portugal egded out Armenia 1-0, converting from close range after Ricardo Quaresma had a shot saved.

It was Ronaldo’s 23rd goal in 37 European Championship games, to take the outright goal-scoring lead having been locked on 22 goals with Jon Dahl Tomasson of Denmark and Turkey’s Hakan Suker.

Portugal are second in the group, one point behind Denmark who came from a goal down to beat Serbia 3-1 in Belgrade in a game played behind closed doors.

In Group F, Northern Ireland lost their 100 percent record when they were went down to a 2-0 defeat to Romania in Bucharest with Paul Papp scoring both goals.

The Faroe Islands, ranked at 187 in the world, stunned former champions Greece 1-0 in Piraeus with Joan Edmundsson scoring in the 61st minute.

The result left the Greeks at the foot of the table with just one point from four games while the Faroes claimed just a fourth away win in 24 years.

Hungary beat Finland 1-0 in Budapest in the group’s other game.