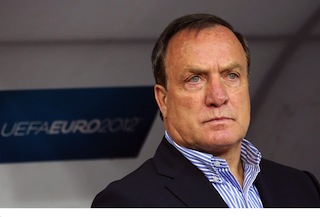 Much-travelled Dutchman Dick Advocaat resigned as Serbia coach on Saturday, a day after a 3-1 Euro 2016 qualifying defeat at home to Denmark, the national football federation said.

“I regret that our joint work ends in this way,” Advocaat said in a Serbian Football Federation statement.

The 67-year-old Advocaat was only appointed coach of the Balkan country in July.

Last season he coached Dutch side AZ Alkmaar, while his long coaching career has seen him have stints with his native Netherlands, Belgium, South Korea and Russia.

His greatest successes have come at club level though, including winning the domestic treble in 1999 with Scottish side Rangers and then the 2007 Russian Premier League and the 2008 UEFA Cup with Zenit St Petersburg.

Serbia are currently at the bottom of Euro 2016 qualifying Group I with just one point.

They started with a 1-1 draw in Armenia before their game at home to Albania in Belgrade last month was abandoned when home fans invaded the pitch and attacked opposition players after a pro-Albanian flag was carried over the stadium by a drone.

Advocaat’s departure follows the sacking of Claudio Ranieri as Greece coach earlier on Saturday and the resignation of Temuri Ketsbaia as coach of Georgia.