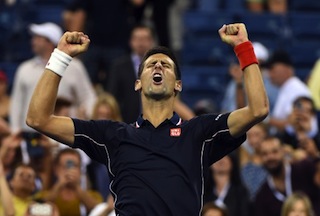 Djokovic of celebrates his victory

Novak Djokovic survived his first serious test of the ATP Tour Finals as the world number one advanced to the final with a 6-1, 3-6, 6-0 victory over Japan’s Kei Nishikori on Saturday.

Djokovic had swept through the group stage at London’s O2 Arena in imperious style, but he was pushed harder by Nishikori, who became the first player to take a set off him since October, before a strong finish secured the Serb’s fourth appearance in the final of the prestigious season-ending event.

The 27-year-old has now won 31 successive indoor matches, including 14 at the Tour Finals, and his final opponent will be either six-time champion Roger Federer or Stan Wawrinka, who meet in an all-Swiss semi-final later on Saturday.

Djokovic, who has lifted the Tour Finals trophy three times, remains on course to become the first man to win the event three years in a row since Ivan Lendl in the 1980s.

“Kei was playing great and this has been the best season of his life but he made some crucial double faults in the third set,” Djokovic said.

“Of course I will watch the other semi-final. I’ll get some popcorn and enjoy it from my bed.”

On Friday, Djokovic had guaranteed he will finish top of the year-end world rankings for the third time in four years — a fitting reward for another dominant year that saw the Serb win Wimbledon, reach the French Open final and claim five other ATP titles.

Nishikori had also enjoyed an impressive campaign and became the first Asian player to qualify for the Tour Finals after reaching the US Open final in September, beating Djokovic in the semi-finals.

The 24-year-old can leave London with his head held high after a solid week’s work, but he will be frustrated to have let Djokovic off the hook when he seemed to have turned the tide in his favour in the second set.

Djokovic landed the first break in the fourth game of the match when a searing forehand forced Nishikori to lunge for a volley that he couldn’t control.

Even by his superlative standards, this was a masterclass from Djokovic and he closed out the first set in 23 minutes.

Yet, with the prospect of their afternoon’s entertainment ending much soon than hoped, the 17,500 capacity crowd threw their support behind Nishikori in a bid to raise his game.

Djokovic seemed in a merciless mood when he pressed home his advantage with another break to open the second set.

But his concentration wavered and a double fault in the next game allowed Nishikori to break back.

That miscue brought a mighty cheer from the crowd, who sensed they might get a competitive match after all, prompting an angry response from Djokovic, who clapped his racquet in sarcastic acknowledgement of the way the support had swung against him.

Djokovic seemed surprisingly rattled by the atmosphere and Nishikori began dictating the points with more aggression.

For the first time all week, Djokovic was under pressure and Nishikori made him pay as he broke for a 5-3 lead and took the set.

Nishikori, who twice needed treatment on his wrist during the first two sets, held a remarkable 21-2 record in decisive sets this season.

But he couldn’t convert two break points at the start of the final set and Djokovic, reinvigorated by that escape, broke in the next game to turn the tide.

Nishikori finally crumbled after that and Djokovic emphatically closed out a win he celebrated with only a cursory wave to the crowd who had so irked him.