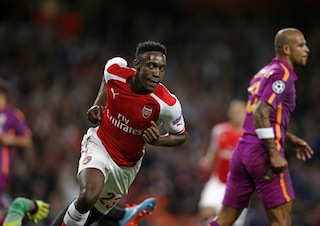 Arsene Wenger’s side had been under pressure after successive Premier League defeats condemned them to their worst start for 30 years, but a midweek victory over Borussia Dortmund, which booked their place in the last 16 of the Champions League, had lifted spirits at the north London club.

Welbeck missed that win due to hamstring and knee problems, but he was back at the Hawthorns to net his sixth goal for Arsenal, ending a run of six club matches without a goal for the former Manchester United forward and giving the Gunners only their fifth league win of the season.

Arsenal climbed to fourth in the table, although they could drop back out of the Champions League places depending on results later on Saturday.

After another week of injury woe left Wenger without Jack Wilshere, Mikel Arteta and Wojciech Szczesny, the Gunners’ boss could have been forgiven for cursing his luck when Nacho Monreal limped off in the first half.

But Welbeck forced a good save from Ben Foster, and Olivier Giroud, making his first start since suffering a broken leg in August, almost punished a careless attempt to clear by Foster moments later.

Welbeck put Arsenal in front on the hour when he met Santi Cazorla’s cross with a powerful close-range header that Foster could only help into the net.

Saido Berahino started for West Brom despite the revelations of his arrest for alleged drink-driving this week and the England Under-21 striker almost equalised when his header cannoned off the bar late on.