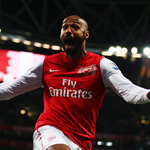 Arsenal Legend, Thierry Henry, wants just one thing this Christmas and that’s to return to his former club.

After announcing he would quit current club New York Red Bulls when his contract expires this month, Henry has now admitted he wants a move back to north London sooner rather than later.

The chances of a return looks quite likely, as Arsenal manager, Arsene Wenger, has said that he would welcome Henry back with open arms.

“That’s the wish. Christmas is arriving soon, so it’s a wish,” He told ESPN.

“It’s not something that’s going to happen like this, it is a wish, everybody knows how much I love the club, my feeling about it. It is a wish right now.

“I’m not trying to get out of the question, but it’s only a day now (since I announced my departure), so, yeah, it is a wish.”

The Frenchman who spent eight years at Arsenal from 1999-2007 before returning on loan in January 2012, was quick to rubbish reports that his decision to leave New York did not necessarily mean he is retiring.

“I had a blast. It wasn’t easy at times, difficult at the beginning for me personally, but afterwards I embraced the league and I knew what the league was about. And I embraced New York, too.”

Henry has played 30 matches for the New York Red Bulls so far and has scored nine goals, while assisting in a further 13 more.