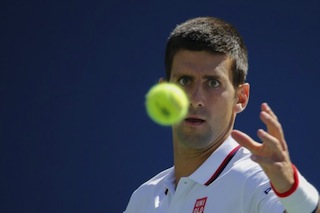 Novak Djokovic: Eyes on the ball

American legend Andre Agassi said Novak Djokovic could be poised for a period of dominance in men’s tennis after showing he can rise “a level above” his peers without even trying too hard.

Eight-time Grand Slam-winner Agassi said barring mishap, the world No 1 looked set for a long stay on top of the rankings after moving out in front this year.

The 27-year-old Serb won seven titles this season, including Wimbledon, and finished with a flourish at the World Tour Finals in London.

“I have to (tip) Djokovic heading into the next year or two,” Agassi told reporters at the International Premier Tennis League in Singapore late on Thursday.

“He seems like he just can hit cruise control and be a level above, and that’s a huge luxury.

“He doesn’t have to play lights-out to beat the top guys, he just has to play contained which is a big statement to how well he’s playing.”

Djokovic had a winning record against all of his “Big Four” rivals –Roger Federer, Rafael Nadal and Andy Murray – in 2014 and he finished ranked top for the third time in four years.

With Federer now 33, Nadal returning from his latest lay-off and Murray struggling for form, the seven-time Slam winner, who recently became a father, could now stay on top, Agassi said. “A lot of things can happen, as we know. One minor injury at the wrong time and that tournament’s gone and maybe that part of the season’s gone,” Agassi said.

When Djokovic seeks his fifth Australian Open title in January, one of his chief rivals could be Japan’s Kei Nishikori, who broke through by reaching this year’s US Open final against Marin Cilic.

But Agassi said it was imperative for Nishikori to move smoothly through the early rounds in Melbourne if he is to become Asia’s first male Grand Slam singles winner.

“If he can get through the first four matches without tapping too far into his tank, it’ll be a big difference for him,” said Agassi, who played an exhibition with Nishikori last month.

“He works really hard and that was ultimately what stopped him from winning in New York. Marin was playing some serious tennis but the truth is, Kei went into that match with a lot of energy spent.

“Any time you have to negotiate a body clock it makes you play a little bit risky… that was his downfall that tournament.