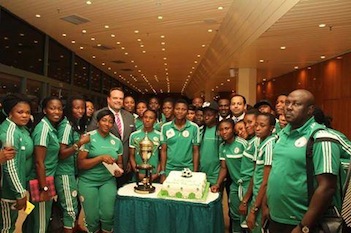 African champions, the Falcons of Nigeria face a difficult task to qualify for the knockout phase of the FIFA Women’s World Cup in Canada next year.

Nigeria, drawn in Group D found herself in company of the USA team, a two time world champion, Australia seeded 10th in the world and Sweden, a European powerhouse, ranked fifth in the world.

The group will not be easy for other teams as well, as only two of them will qualify for the next stage.

But US forward Sydney Leroux took to Twitter to indicate the Americans are up for the challenge.

“Bring it on,” Leroux tweeted.

Adding intrigue to the match-up between the United States and Sweden, current Sweden manager Pia Sundhage guided the Americans to back-to-back Olympic titles before taking the helm in her native country in September of 2012.

The former Sweden international admitted before the draw she thought it was “weird” that sixth-ranked Brazil, rather than fifth-ranked Sweden, got the nod as a seeded team.

“But I’m not the person who can do anything about it,” she said, adding the best policy was to “just accept it and go with it.”

The seventh edition of Women’s World Cup will feature 24 teams for the first time — up from 16.

The first- and second-place finishers in each group automatically advance to the round of 16.

Hosts Canada will open the tournament in Edmonton on June 6 against China, with New Zealand and the Netherlands rounding out Group A.

Two-time champions Germany could also breathe a sigh of relief at their draw in Group B, which includes dangerous 1995 champions Norway but also inexperienced Ivory Coast and Thailand.

Brazil, led by five-time women’s world player of the year Marta, will face South Korea, improving Spain and Costa Rica in Group E and France, ranked fourth in the world, will face England, Colombia and Mexico in Group F.

Defending champions Japan gained a dream draw: seeded atop Group C, they will face Switzerland, Cameroon and Ecuador, all first-time qualifiers for the tournament.

First-round matches will be played in Vancouver, Edmonton, Winnipeg, Ottawa, Montreal and Moncton, with the final in Vancouver on July 5.

Japan lifted the trophy with a dramatic win over the United States in Germany four years ago, delivering a boost to their country months after a deadly earthquake and tsunami.

But the United States gained revenge by winning the Olympic gold ahead of Japan in London, with Canada taking bronze and France finishing fourth.

Despite controversy over the plastic pitches for the event Japanese head coach Norio Sasaki insisted they can adapt after beating Canada in a friendly on the surface in Edmonton in October.

Matches be played in Canada from June 6 to July 5: