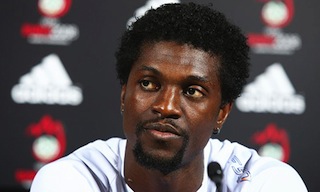 Togolese international striker Emmanuel Adebayor has been allowed to return to Togo by his Premier League club Tottenham Hotspur for personal reasons, the team tweeted on Wednesday.

The 30-year-old — who has not played for the club since the November international break — has been bedevilled by fitness issues and illness this season.

Tottenham did not divulge any further details, stating in a tweet it was a “private matter”.

Adebayor, who has scored twice in 12 appearances for Spurs this term, has been affected by hamstring and back injuries followed by a virus.

However, Spurs manager Mauricio Pochettino has denied the fragile striker would be off-loaded in the January transfer window.

“All players that we have in the squad are part of the plans for the future,” the Argentine said.

Adebayor, who has also played for Spurs’ bitter north London rivals Arsenal, was given compassionate leave by another of his former clubs Manchester City in 2010 after the Togo team bus was attacked by gunmen at the Africa Cup of Nations in Angola, resulting in three deaths.